A Rochdale youth has been jailed for the murder of Jalal Uddin, a religious scholar in Rochdale….reports Asian Lite News 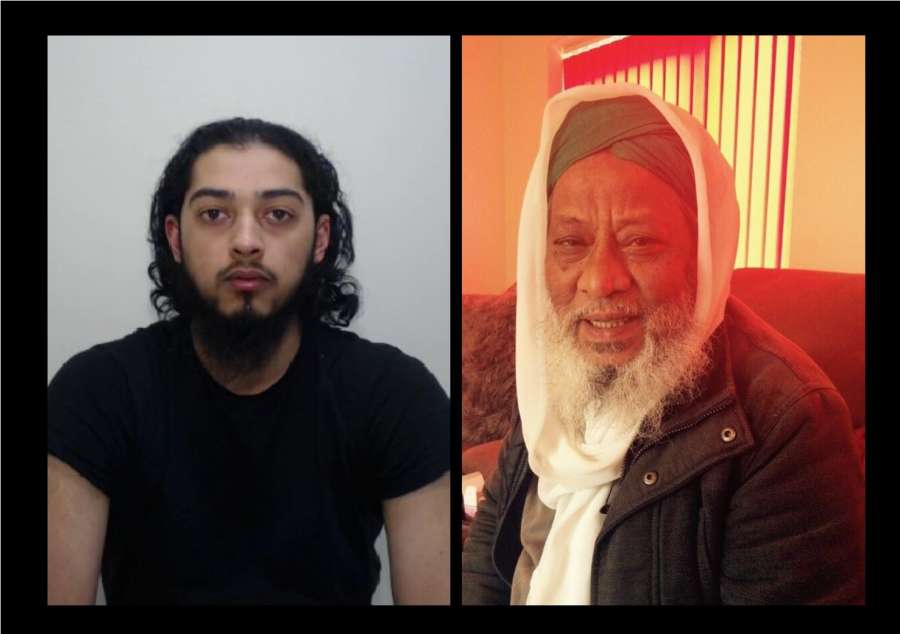 Mohammed Hussain Syeedy, 22, of Ramsay Street, Rochdale has been convicted of the murder of Imam Jalal Uddin. He has been sentenced to 24 years in prison.

On Thursday 18 February 2016, Jalal, 72, left a friend’s house on South Street, Wardleworth and began walking home; cutting through a play-area at the end of the street. Unknown to Jalal, he was being followed by Mohammed Syeedy in his Vauxhall Astra.

Syeedy pulled up close to the entrance of the play-area and a second man got out and followed Jalal into the park. It is believed that this man then attacked Jalal with a hammer causing horrific head injuries. In the meantime, Syeedy drove to the other side of the play-area where the other man emerged from a different entrance and got into the car. The pair then drove away.

Mr Uddin was found injured by passers-by a short time later. He was taken to hospital but he sadly died that night. The motive for the murder centred on Jalal’s practice of ‘Taweez’, which some followers of Islam believe can bring good luck and protect them from harm.

It is believed that Mohammed Syeedy and others disagreed with the use of Taweez and the motivation for killing Mr Uddin was born out of a hatred and intolerance of this practice. In the months prior to the victim’s death, Syeedy and others closely monitored his movements; culminating in the tragic events of the evening of 18 February 2016.

Following the murder, police enquiries found what appeared to be extremist style material and established that one of the men believed to be involved had fled the country. Due to the materials found and international element of the investigation, the expertise of the North West Counter Terrorism Unit was sought.

Detective Chief Superintendent Tony Mole, head of the North West Counter Terrorism Unit, said: “First and foremost I would like to extend our deepest condolences to the family of Jalal Uddin. He was taken away from his loved ones in what was, quite frankly, a brutal and horrific attack on a lone man.

“Although Mohammed Syeedy may not have delivered the fatal blow to Mr Uddin, it is clear that he played an integral role in the murder.

“This has been a long and delicate investigation, with a team of detectives working meticulously to fully establish exactly what happened to Jalal and I want to thank them for their work.

“I would also like to thank the local community for the patience and support they have shown us throughout this investigation. Their assistance and understanding has been a vital part of this process and they have been a credit to the town of Rochdale.

“I hope the outcome here today will bring some closure to Jalal’s family and help them continue to rebuild their lives following their tragic loss.”

The family of Jalal Uddin has paid tribute to him: “This has been a difficult and arduous journey for us as a family, since those tragic events which transpired on the 18th February 2016.

“Having attended court for the past four weeks, listening to the evidence of Jalal’s last moments has been the hardest thing we have had to endure as a family. But we take comfort from the fact that the evidence acknowledges that Jalal was a greatly respected man, a caring and loving soul. The evidence has also highlighted how the events leading up to his murder showed what an incredibly cruel and callous attack this was on an innocent elderly man. It was shown that Jalal was unable to defend himself against such brute force making the acts of these perpetrators deplorable and cowardly.

“We hope that with all the information which has come out in court, and from within the wider community of Rochdale, it is clear to all that Jalal did not deserve what he was subjected to, not only on the night of the attack, but also the inexplicable events which occurred months prior to his horrific murder, when his personal belongings were taken from within the Jalalia Mosque, in Rochdale, and the fact that he was stalked and filmed without his knowledge months before his murder.

“We came to court to seek answers from Mohammed Hassan Syeedy. He has shown no remorse or sympathy towards Jalal or his family, as indicative of his attitude and demeanour throughout the last four weeks.

“Weeks prior to his murder, Jalal had intended to return to Bangladesh and be reunited with his wife, children and grandchildren whom he had not seen for some 15 years, in which time he had dedicated his life to selflessly serving his family, trying to make ends meet.

“Although Jalal was a Muslim who peacefully practised his faith, he had a love and respect for all religions, cultures and creeds, and the fact that he was murdered by someone inspired by ISIL shows the true nature and barbarity of this organisation and those who serve it.

“Jalal’s widow has lost a best friend, and one of his son’s, who last saw his father when he was 5 years old, and who led his funeral did not even see Jalal’s face due to the horrific facial injuries he sustained. Our family has now been left empty, and we have no words which could accurately express our emotions. Jalal was the greatest man in our lives; his smile will never be replaced. They say perfection cannot be achieved, but Jalal came pretty close, as exemplified by his principles, his mannerisms and his incredible love for his family and his religion.

“Our family would like to thank everyone for their many kind messages of support; the many people from all the different backgrounds, from all over the UK who have been a source of comfort to us at this time of great difficulty.”