Nadiya Hussain, the winner of the BBC’s Great British Bake Off in 2015, will open this year’s Asia House Bagri Foundation Literature Festival with a discussion about integration and identity in the UK. Hussain will be in conversation with journalist Yasmin Alibhai-Brown about her experience of growing up as an Asian in the UK and what it was really like to win the BBC’s Great British Bake Off. Events with Dutch historian Frank Dikötter, Pulitzer Prize-winning journalist Mei Fong, Turkish author Elif Şafak and bestselling crime writer Boris Akunin also feature as part of this year’s programme. 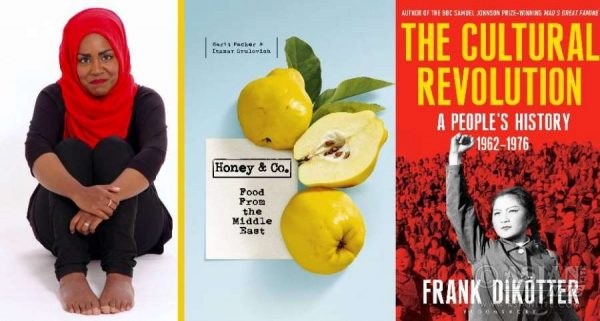 The festival will run from Wednesday 4 May until Wednesday 18 May, with the majority of events taking place at Asia House’s central London headquarters. A selection of pre and post-Festival events will take place throughout April and May.

The books launched at this year’s Festival includes The Cultural Revolution, the final volume in Frank Dikötter’s prize-winning and highly acclaimed People’s Trilogy. The book recasts China’s most tumultuous era, the Cultural Revolution, in a wholly new light. British travel writer Caroline Eden will launch her first book Samarkand: A Culinary Journey through Central Asia and Pakistan-born food writer and cookery teacher Sumayya Usmani will take us further east with the launch of her new book Summers Under the Tamarind Tree: Recipes & Memories from Pakistan, which celebrates the heritage and traditions of her home country.

This year’s programme taps into wider discussions around gender and identity with an evening of performance art from London-based spoken word artist Shane Solanki, who will address the topical subject of transgender within Asian communities. A panel of three leading thinkers from Asia, including Elif Şafak, will look at what the emergence of new lifestyles and family dynamics is meaning for women across the continent, in an event chaired by Women’s Editor at the Daily Telegraph Emma Barnett. There will also be an exploration of Pakistan’s dynamic contemporary art scene addressed by Pakistani author Kamila Shamsie, which will address how socio-political issues are being identified and expressed through art.

Some of the events which take place outside the main Festival dates includes three talks to mark the 25th anniversary of the restoration of Georgia’s independence by authors from Georgia who will discuss various aspects of Georgian literature and life in the Caucasus. It will kick off with a talk from bestselling crime writer Boris Akunin, who will be in conversation with journalist Boyd Tonkin.

Pulitzer Prize-winning Malaysian-born journalist and writer Mei Fong will introduce her new book One Child, which looks at the ramifications of China’s One Child Policy at the end of May, after the Festival has finished.

Jemimah Steinfeld, Literature Programme Manager, said of this year’s line-up: “Literature has always been one of the best vehicles through which to see the world, to confront stereotypes and to challenge assumptions. At a time when Asia is changing immeasurably, I wanted this year’s Festival to reflect that. A really exciting and dynamic programme has emerged focused around the notion of the alternative voice.”