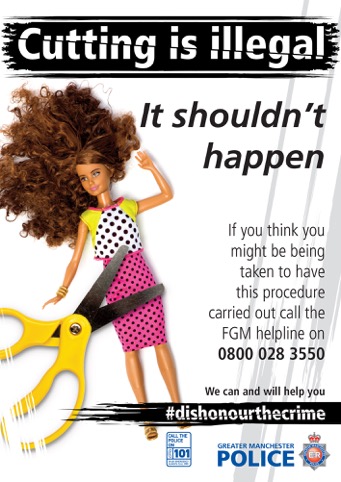 Specialist officers from GMP and Border Force will join charities and partner organisations to launch a new awareness campaign and talk to passengers at Manchester Airport in an annual operation aimed at tackling Female Genital Mutilation (FGM) and teaching people the signs that indicate someone could be at risk.

Officers from GMP and Border Force will be joined by charities and partners from Thursday 21st July to Monday 25th July in the departures area of Manchester Airport for Operation Limelight.

During this time they will be speaking to holiday makers and other visitors to the airport and also showcasing new artwork that will be used throughout the year to signpost victims and those who wish to report concerns about FGM.

GMP and Border Force will then carry out the same operation in arrivals from Tuesday 30th August to Friday 2nd September.

This is the third year of Operation Limelight, with hundreds of families given advice on FGM and other crimes over the past two years. This year’s posters are aimed at adults and children who are travelling through the airport to encourage them to report concerns.

Detective Inspector Nathan Percival from GMP said: “This operation targets busy times in an airport with flights to key destinations for these illegal practices. The summer holidays are a prime time for parents to take young girls abroad to have this abhorrent procedure carried out.

“By working with Border Force and partner agencies we want to educate people passing through the airport on what to look out for and how they can help potential victims of FGM but also to send a clear message to anyone inflicting this procedure on their child or carrying it out themselves – this crime carries a maximum sentence of 14 years in prison and will do everything that we can to keep children safe from this type of harm.”

Operation Limelight began just after GMP issued its first FGM protection order last July. Since then the Force has issued five orders in total, protecting people from the illegal procedure.

Greater Manchester Mayor and Police and Crime Commissioner Tony Lloyd said: “Female genital mutilation is child abuse. We all have a responsibility to protect our children and put a stop to this horrendous and criminal practice. We’ve been doing a lot of work across Greater Manchester, bringing police, councils, health, education and voluntary organisations together to raise awareness of female genital mutilation, educate communities and encourage people to speak out. This operation is part of this positive work and I hope it sends a strong message to victims that they don’t have to suffer in silence – help is available.”

FGM involves the partial or total removal of the external genitalia or injury to the female genital organs whether for cultural or any other non-therapeutic reasons. It is prevalent in countries in mid and northern Africa and parts of Asia. It is allegedly carried out to safeguard a young woman’s virginity and her family’s honour, and can involve a festival or celebration as part of the ceremony.

Passengers are reassured that although incidents do not happen on a daily occurrence, the summer holidays call for extra vigilance as parents often use this period as an opportunity to take young girls abroad.