About 50 non-resident Malayalis across the U.K. got together at the Jubilee Theatre in Newcastle on to enact ‘Kanthi’, a Malayalam-English musical play, on atrocities against women and the struggle for their emancipation. 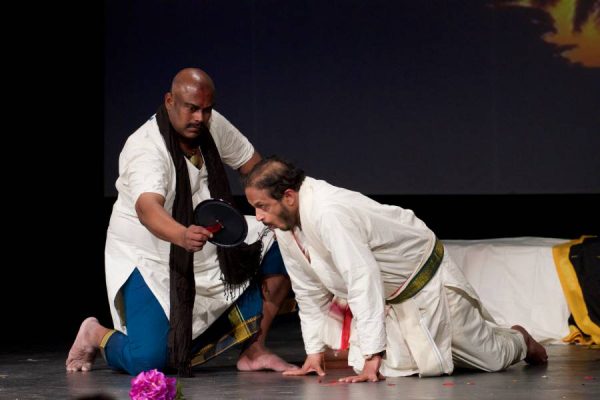 The 210-minute play, directed by Shiva Manoj, calls for a world where men and women live in harmony and complement each other. Inaugurating the play, veteran Indian actor Madhu said that it touched on a few burning social issues even as it proved to be pure entertainment. “I found the format appealing. The serious message was delivered through spectacle and catchy performance,” he added.
Kanthi reflects the conflicts a woman endures in her life. It depicts her love and longing, her cries and whispers, and the acts of betrayals she falls victim to. The play points out the importance of
gender equality. It recreates scenes from some of the best-loved and critically-acclaimed women-oriented movies ever made in Malayalam. “The recreation is used as a theatrical device,” said the director.

Act I re-enacts the story depicted in the 1954 Malayalam movie classic, Neelakkuyil (The Blue Cuckoo): the love affair of a Dalit girl, and an upper-caste school teacher, in a Kerala village. Caste
becomes a huge barrier for fulfilment of her love. Act II, drawn from the 1965 Malayalam feature film, Chemmeen (The Prawn), depicts the failed affair between a Hindu girl from a fishing
community and a Muslim trader. Act V focuses on the plight of P. K. Rosy (Rosamma), a Dalit actress
who appeared in the first Malayalam feature film, Vigathakumaran (The Lost Child/1928). She donned the greasepaint at an age when women acting on -stage or screen was considered akin to prostitution. When the movie was released, she was forced to flee home.

Act VI, the final one, portrays Desdemona’s tragic fate. It explores against the backdrop of Kerala’s Theyyam performance the cultural strands that weave the experience of the Shakespearean tragedy. In the act, Othello, Desdemona, Iago and Cassio become Kannan ,Perumalayan, Thamara,  and Kanthan respectively.Shakespeare appears as a character. So does Giovanni Battista Gerald (Cynthio), an Italian writer whose 1565 story Un Capitano Moro (A Moorish Captain), inspired the Bard to write Othello. 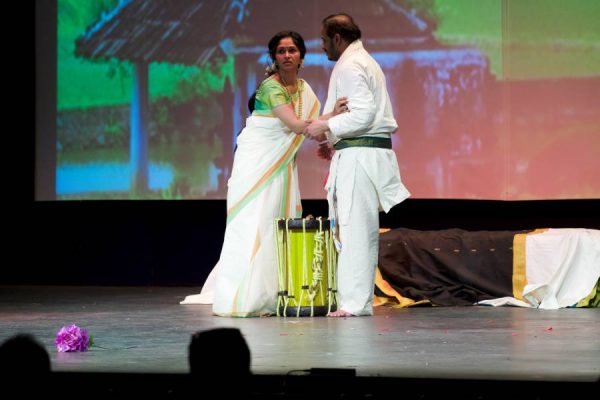 The acts are linked by a choreography featuring Kanthi, a fictional character. “She embodies the spirit of freedom and liberty, and upholds the struggle for women’s rights and gender equality,” stated the director. The play affords a rich cross-cultural experience. A Clown (played by
a British actor) introduces the play to the audience. His interaction with an Indian actor brings up a cross-cultural exchange, and points out that gender-based violence knows no social, economic or national boundaries.

So speaks the Clown, “Tell me if you have heard of Juliet, of Layla, of Desdemona and of Joan of Arc? The stories of these women have a common thread – the thread where the woman was wronged – for love or otherwise. And that is what we are trying to change today with Kanthi – we are trying to be fair – to these women and to women everywhere. We are rooting for equality. Not dominance.”

Kanthi is being staged across various theatres all over Europe.