Rt. Hon. John Bercow changed the landscape of parliamentary procedures in Britain through his determination to fulfil his constitutional obligations. He was re-elected to the post with the support of opposition when his own front plotted to unseat him over some of his rulings. But for Bercow, democracy is always for the betterment of the people. Speaker meets Azeez Anasudhin, editor of Asian Lite 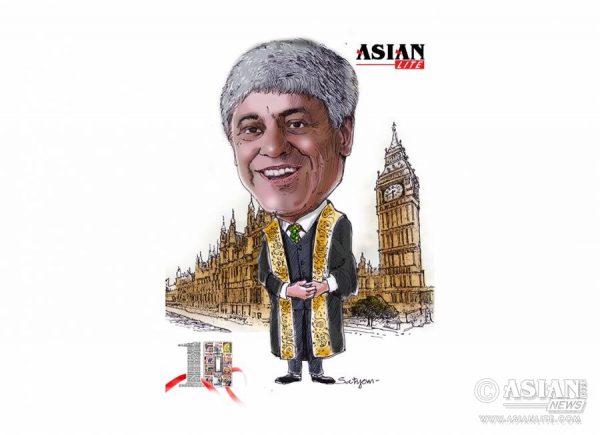 Azeez:. How do you want people to remember your tenure as Speaker?

Mr Speaker: As Speaker, I have tried to empower Parliamentary colleagues to scrutinise effectively the workings of government, and the Bills before the House of Commons. If I was to choose how I am remembered – and I realise that it is not me who will ultimately make this choice – I should like people to remember me as a champion of backbench MPs, and a Speaker who achieved worthwhile modernisation in Parliament.

Azeez:. Your biggest achievement as Speaker?

I feel modest pride on several fronts. However, I think that the achievement that gives me the most satisfaction is that we finally managed to build an Education Centre in Parliament. For years there had been in the ether plans for the establishment of an Education Centre, but nothing had happened.  We worked at it, we developed the plans, we got the permission from the local authority, we established the make-up of the site and the contents that would go into it.  I was delighted to attend its opening in July 2015. It is a new state-of-the-art, cutting edge, digital, interactive facility, which will allow more than a doubling of the young people who can come to Parliament and learn about the arduous journey to the rights and representations which we all enjoy today.

Azeez: You quit the Shadow Cabinet to become Speaker. Why?

I didn’t quit the Shadow Cabinet to become Speaker. It is true that I served as the Shadow Secretary of State for International Development from November 2003 but I returned to the backbenches in September 2004. By the time of the Speakership election in 2009, I had not held a front bench position for nearly five years, but had busied myself in my role as a local MP for the Buckingham constituency and an advocate on subjects such as LGBT equality, the human rights situation in Burma and better provision for children and adults with autism.

Azeez: Is the public disillusioned with the politicians or the political system? How can we engage the electorate with the system?

I think it would be fair to say that politics isn’t revered as a profession. Sometimes this opprobrium is warranted – I don’t think anybody would or, indeed, could argue that as a class we covered ourselves in glory during the expenses crisis. However, I know from personal experience, both as a local MP and as Speaker, that the vast majority of my colleagues are extremely diligent in terms of standing up for their constituents, scrutinising legislation and holding the government to account. I would suggest that politicians work harder than they ever have before, due largely to the huge expansion in the number of online communication tools which has made getting in touch with elected representatives easier than ever before. It is up to all of us politicians to build on that engagement by getting out into our communities and making the case for Parliament. As Speaker, I spend as much time as my diary will allow – when I’m not undertaking my duties in the chair or in my Buckingham constituency – speaking to local groups, schools and universities about Parliament and engagement with the political process. I consider this work vital, and it has formed a key part of what I consider to be the role of a modern Speaker.

Azeez: What is your take on the role of social media in the democratic process?

Social media is extremely important, and all the signs are that it is to become more rather than less so in future. One of the changes I have implemented is to allow small, hand-held devices to be used in the Chamber, allowing MPs to tweet proceedings real time, and engage with their constituents and the wider public during debates. I also established the Speaker’s Commission on Digital Democracy, which reported early last year, to look into some of the ways that the House of Commons might capitalise on new media to promote better engagement and understanding. One example of this is the “Digital Chamber”: MPs who have petitioned successfully for debates are encouraged to hold a virtual discussion on the topic a few days before the actual debate takes place with interested organisations and members of the public. These interactions then informs the subsequent discussion in the House. It is one of the ways that we are using technology to promote a more meaningful relationship between politicians and those we are elected to represent. It is not just useful in engagement terms, but is also an invaluable way of tapping into the huge expertise out there on the multitude of matters which are debated in the House every day.

Azeez: Are the media doing their job responsibly?

No parliamentarian could credibly claim that the relationship between politicians and the public does not have its fraught moments. The media are often after a yes-or-no-who’s-to-blame answer, but nothing in politics – or life, for that matter – is ever that simple. This, naturally, produces tensions at times.

Azeez: Is the political picture too gloomy to inspire the new generation?

Absolutely not. Every generation should be inspired to change the world for the better.

Azeez: The unelected House of Lords is blocking some legislation approved by the elected House. Is this good for democracy?

This is very much down to your point of view. However, as Speaker, I must remain impartial on constitutional conflicts which have their roots in policy differences between the government and opposition.

Azeez: The number of MPs will be shrinking in the next Parliament. How will this affect the democratic process?

It is too early to say. However, I would argue that if there are fewer MPs, there should be fewer Ministers.

Azeez: Has PMQs changed since Jeremy Corbyn was elected leader of the Labour Party and do you like the change?

Every Prime Minister and, indeed, Leader of the Opposition, handles Prime Minister’s Questions (PMQs) in a different way and with distinctly different styles. PMQs is important, at least as far as I am concerned, as it gives backbench MPs an opportunity to raise their concerns directly with the Prime Minister, and it is the envy of countries that don’t have it. When I travel abroad to visit other parliaments, I am often told by members of those parliaments how jealous they are of the session, and wish that their own system could adopt something similar. However, it is a fact that sometimes “passionate” crosses the line, and the decibel level actively impedes proceedings. I have often said that this behaviour is a spray painting of our shop window. There are many thoughtful, considered and interesting debates that go on in the Commons, but everyone gets so hung up on PMQs and how we behave in it, that it often goes unnoticed.

Azeez: As Speaker, what is the most annoying/irritating thing?

Overly long speeches, meaning that we make inadequate progress through the speaking list. I am a firm believer in everyone, especially backbench MPs, having the opportunity to have their say.

Azeez: Do you think that the voting age should be lowered to 16?

As Speaker, I must remain impartial, and it would be inappropriate for me to comment on a matter that has been of recent contention between the parties. However, I will say that it is a matter of public record that before I became Speaker I supported a lowering of the voting age to 16.

Azeez: Why are there so few BAME MPs, and how can we improve the situation?

The first BAME Member of Parliament was elected in 1841, but in spite of this promising start, it is a fact that headway has been slow in terms of achieving parity. It should be an urgent priority for political parties and Parliament alike to address this imbalance to ensure that we benefit from the greater diversity of elected representatives. To this end the Speaker’s Conference on Parliamentary Representation committed, in 2010, to improving the diversity of Members of Parliament and, more recently, the Speaker’s BAME Advisory Group is looking at innovative ways to encourage individuals from what we might term non-traditional backgrounds, to apply to work in the House of Commons.

Azeez: What is your advice to young people who wish to become parliamentarians?

When I visit schools and universities as part of my Outreach programme, I get asked this question quite a lot. I would answer – and do answer – that the best advice I can give does not necessarily refer to politics, but to life generally: work hard, believe in yourself and never give up. A lot of what happens in the course of human existence is down to luck and opportunity (or lack thereof). However, anyone can influence how they can turn a disaster into an opportunity, and good luck often does not last if it isn’t fully capitalised upon. By getting the best education that you can, by taking advantage of every opening and by believing in yourself, you will surprise yourself by how much you will achieve.

Azeez: You welcomed Indian Prime Minister Narendra Modi to Parliament. What is your take on Indian democracy and current issues like intolerance?

It was an honour to welcome Prime Minister Modi to Parliament. Indian democracy is a vibrant rebuke to those who say that such freedoms are unachievable in large states. But, as I said in my introduction to Prime Minister Modi, to rout the disbelievers completely, democracy has to demonstrate that it can respect free speech and incorporate a true diversity of creeds, faiths and orientations without diminishing or disrespecting any of them.

Azeez: Any comments on the Asian community in Britain.

The community makes a huge contribution to British life, and I hope that its members will continue to build on its successes, both in terms of representation in Parliament and more widely across our national life.