Mohammad Asghar aka Oscar, Conservative Member of Welsh Assembly, explaining why he is supporting IN

For the past few months I have been asked countless questions on the EU. I have heard all of the lines for and against and I sincerely believe it’s each person’ s responsibility to be fully informed about the choices that lie ahead of them before they cast their vote. My Daughter, who holds a Masters in politics said “Dad one needs a degree to understand some of the things I’m seeing and reading. It’s not easy to understand.”

It made me realise that so many people will be receiving literature. However some of the information is so vague it may not actually be clear. We are all seeing an array of politicians speaking up on the issue. But what are some of the pro’s and cons? Also, how does it ACTUALLY affect you?

Many of my constituents have raised their concerns on terrorism and national security. For the record I’d like to state the Prime Minister, David Cameron, won a deal that the UK can take necessary restrictive measures against individuals that represent a serious threat to our safety. Also by remaining in, the United Kingdom will be given new powers to stop suspected terrorists and criminals coming to the country even if the threat is not imminent.

If we stay in, Prime Minister David Cameron has secured a deal that states that Britain will not be drawn into an ever-closer union and further political integration. A lot of people feel that Britain is controlled too much by the EU but I can confirm that the Prime Minister has secured a new “red card” system which means that if 55% of national parliaments agree with our House of Commons we can block new unwanted EU laws.

If we leave things will not actually change as much as we are hearing and seeing on the television. We will still have to abide by EU laws including the Working Time Directive which requires EU countries to guarantee rights for workers such as a limit to working 48 hours a week on average, including any overtime and a minimum daily rest period of 11 consecutive hours in every 24 hours.

Let’s talk about the issue that everyone seems to be concerned about when “brexit” is mentioned…Immigration By staying in, The Prime Minister has secured an in-work benefits deal that says EU migrants who want to claim tax credits and child benefit must live here and contribute to the country for at least four years. But this will only last seven years and the benefits must be phased in over the four years. New EU migrants are currently banned from claiming job seekers allowance for the first three months and this will remain.

The UK is not a member of the passport-free Schengen zone, so has control of its own borders. It’s also worth noting and mentioning as so many people have called and asked me to clarify that- Immigration from outside of Europe is not affected by Britain’s EU membership. Even if we remain part of the EU, Brits can live abroad, in places like France, Italy and Spain without a visa.

Another issue that I am incredibly passionate about is the economy. By staying in for the first time, it will be recognised by law that the EU has more than one currency. Mr Cameron’s deal will ensure that British taxpayers’ money can never be liable to support the Eurozone.

Mr Cameron’s deal means Britain will not be required to fund bailouts to other EU countries and will be reimbursed for EU funds to help the euro.

It’s a fact that the UK has trade agreements with more than fifty countries across the globe, under terms agreed through EU membership.

The UK Treasury estimates that 3 million jobs are linked to our exports to other EU countries, which could all potentially suffer if we leave the EU.

The last and perhaps most important point is that allows businesses to move money, people, services and products around the world if they are part of the EU.

Some businesses are pro leave because they feel that there is a lot of red tape on businesses, especially regulations for small and medium businesses. Some say that trade with EU could become more costly because even if Britain negotiates an agreements without tariffs, increasing differences in regulations and meeting standards could see a fall in trade.

The pro-Brexit campaigners will say that if we wanted to be like China or countries with a trading relationship with the EU but not part of the Single Market, we would have greater control of our borders. If we left, the EU would not be allowed to discriminate against the UK specifically, and we would face the same tariffs that any country without a free trade agreement with the EU would.
If the UK and EU cannot strike a deal, the UK would be required to follow World Trade Organisation rules on tariffs.

It has been estimated that tariffs would cost British exporters £7.4billion a year; less than the amount we pay into the EU.

For the record I am in, but I hope some of these points have clarified the situation with Europe and I ask everyone to remain informed about this issue as much as you can. As it will not only affect us, but our generations to come. 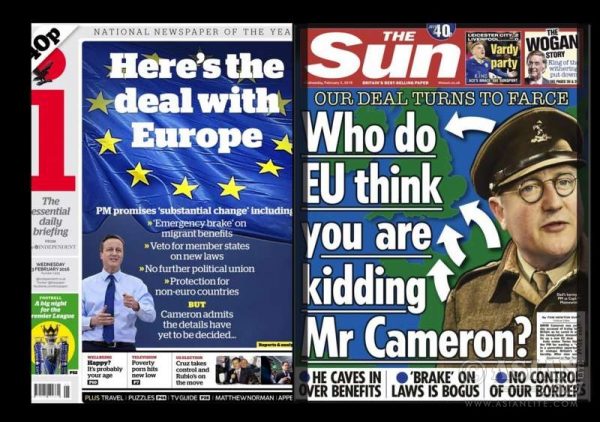