The Guardian exposed a shocking system in Cardiff where asylum seekers were told to wear Red Bands to get food…. reports Asian Lite News 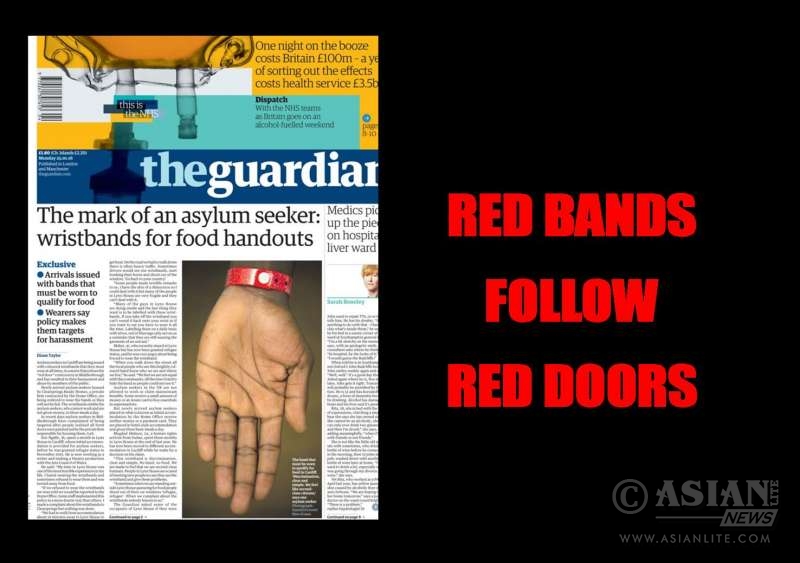 Following the G4’s “Red Door” controversy in Middlesbrough, the Guardian reported that asylum seekers were told to wear a Red Band as and identification for food.

Jo Stevens, the shadow justice minister and Labour MP for Cardiff Central, said that she had spoken with Clearsprings Ready Homes, the private company contracted by the Home Office to accommodate newly arrived asylum seekers, and voiced “grave concerns”.

The wristbands have been handed out to asylum seekers staying at Lynx House in Cardiff, accommodation run by a Home Office contractor, so they can claim breakfast, lunch and dinner. Asylum seeks cannot work and are not given money.

The Welsh Refugee Council (WRC) in a statement said the wristbands echoed the yellow star Jewish people were forced to wear in Nazi Germany.

WRC policy officer Hannah Wharf said: “We have raised the matter many times with the Welsh Government. It harks back to the Nazi regime with people being forced to wear a Star of David and stand out.

“It’s absolutely appalling, it is treating people like lesser beings. It is treating them like animals lining up to feed.”

MP Stevens said she will raise the issue in Parliament today.

“The reported abuse is completely unrepresentative of the kindness and generosity that my constituents and people across the whole of Cardiff have shown to asylum seekers and refugees over a long period of time,” Stevens told The Guardian.  “I will also be contacting the Home Office minister to get answers to my questions about the adequacy of the monitoring of initial accommodation services contracts by the Home Office.”

Stevens said she would petition in the Commons for an investigation into why the practice had been permitted.

The Guardian also reported that Clearsprings will stop using the wristbands at Lynx House soon and switch to a temporary manual system for identifying residents entitled to meals. Photo ID cards will be introduced within the next few weeks.