The Chinmaya Mission is conducting a series of evening talks in English, entitled “Essential Values of Mahatma Gandhi”, from 30 March to 3 April 2016 at Fairfield Halls in Croydon, South London. Swami Chidatmanandha, a senior priest of Chinmaya Mission will be conducting these talks.  The talks are part of a series of major events being organised by Chinmaya Mission UK this year to mark the Birth Centenary Celebrations (BCC) of Swami Chinmayananda. 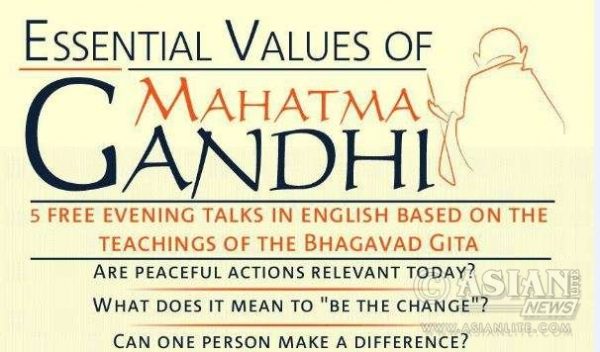 The talks aims at bringing the life history of Mahatma Gandhi to the fore. Chinmaya Mission believes that Gandhiji’s life story is an incredible journey of an ordinary man of average intelligence who achieved the extraordinary. “Through his resolute commitment to the Indian independence movement and total identification with his nation, people and their plight, he took on the mighty British Empire with his powerful non-violence resistance movement and empowered millions to adopt a noble and peaceful approach to fighting oppression. It was an approach that has inspired other great freedom fighters and ordinary people alike,” said a spokesperson of the Chinmaya Mission.

While the influences were many in the life of Mahatma, the effect of Hindu scriptures on his life, in particular the Bhagavad Gita, is undeniable. He had once said, “When doubts haunt me, when disappointments stare me in the face and when I see not one ray of light on the horizon, I turn to the Bhagavad Gita and find a verse to comfort me and I immediately begin to smile in the midst of overwhelming sorrow.” 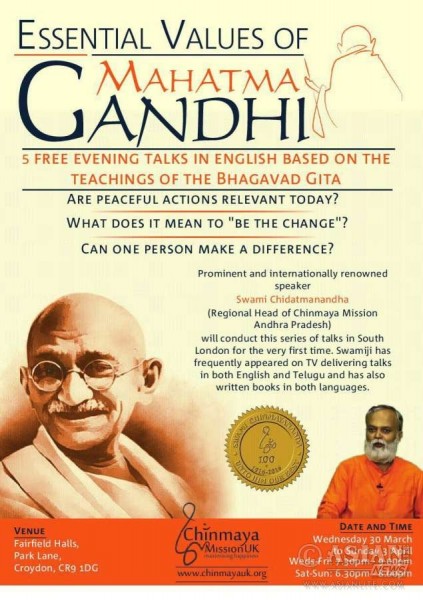 His life and legacy are testament to the power of a philosophy lived.  Through his subjective experiments with his own life and his perpetual quest for Truth, he was a living example of how an imperfect man internalised and attempted to dynamically live universal teachings transforming himself and the world around him.

Chinmaya Mission hopes to remind ourselves of this ever-inspiring message of Gandhiji with these talks and expects that we can ultimately adopt some of those essential values and experience their beauty in our own lives.