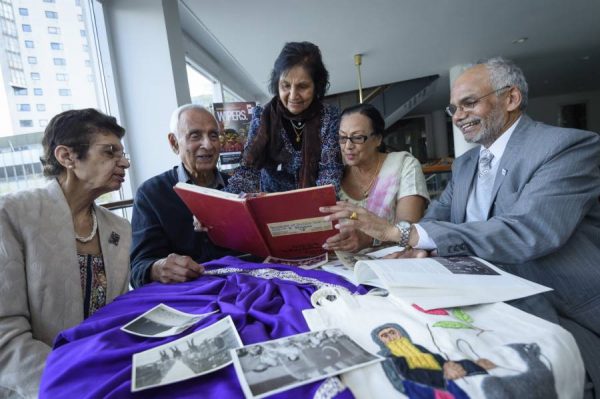 Audiences from across Coventry and Warwickshire were invited to delve deeper into the hidden history of WW1 and WW2 at Coventry’s Belgrade Theatre for an afternoon of inspirational talks, presentations and live demonstrations commemorating the Black and South Asian contribution to war.

The event, which was inspired by the Belgrade Theatre’s new co-production of Ishy Din’s WW1 drama, Wipers, saw local resident and life-long campaigner Jagdeesh Singh lead a talk on the Sikh contribution to world conflict between 1850 and 1945 featuring priceless heirlooms from his own family’s military past. Three generations of Jagdeesh’s family served in the British Indian Army including his great-great grandfather Bassan Singh in the 1st Sikh Infantry: the first Sikh regiment formed in the British Indian Army following British occupation and annexation of the Punjab in 1849. This was followed by his son, Bufsun Singh, and then by Maghar Singh who served in the distinguished Kings Own Central India Horse during both World Wars.

Jagdeesh Singh’s father was instrumental in campaigning for the Stoney Stanton Road memorial dedicated to the Sikh regiments who died alongside their British brothers during both world wars.

Commenting on his family history, Jagdeesh Singh said; ‘When my grandfather and his fellow soldiers first arrived in France in 1915, they were received with great acclaim. The women were fascinated by them and the French welcomed them with open arms. By the end of the conflict, the French attitude had gone from great welcome and acclaim to derision and racism and tragically much of that negative attitude is still present in France today to the extent that legislation exists today in France forbidding people like me from holding a driving license, being a schoolteacher or holding public office.”

Other speakers at the event included ex-soldier and Afro-Caribbean historian Gary Stewart who lead a discussion on the West Indian contribution to the First World War. He was joined by Dr Avaes Mohammed from British Future Think Tank who lead a talk on Empire, WW1 and British-Asian Muslim Identity Today,

Commemorating the lost voices of the Indian soldiers of WW1, historical society Salt of the Sakar were also on hand to share a selection of dramatic readings from the centenary edition of Mulk Raj Anand’s classic war novel ‘Across the Black Waters’ which featured extracts from some of the original letters written by South Asian soldiers to their families back home.

Across the Black Waters by Mulk Raj Anand, is the only novel written from the perspective of the million Indian soldiers who fought in World War One, telling of their arrival in Marseilles in September 1914 to fight in the trenches of Flanders through the first winter of the war.

Visitors at the event were also invited to enjoy a taste of the frontline courtesy of The Pod, with a selection of free food samples inspired by the original rations eaten by South Asian soldiers in the trenches.