Dr Mattur Nandakumara aka Nandaji is a beacon of Indian culture in London. The Sanskrit scholar who is teaching at prestigious institutions like Cambridge and Eton besides Bhavan is inspiring Indians in Britain to learn more about their motherland and its culture…. writes Rajitha Saleem 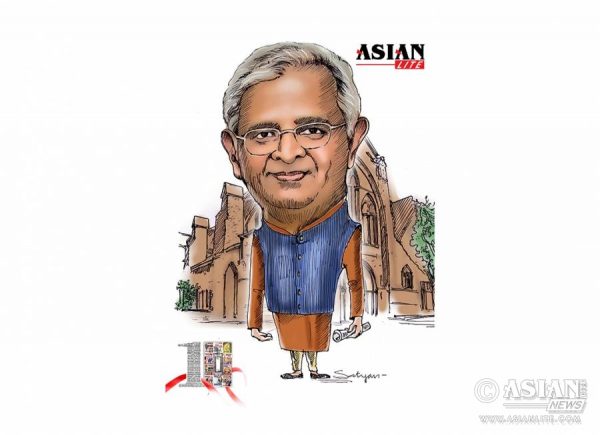 Hailing from the only Sanskrit speaking village of Mattur in Karnataka in India, it was only expected of Dr M N Nandakumara to excel in the ancient Indian language. But he achieved much more than any of his family wished for—he is the greatest exponent and epitome of Sanskrit language and literature in the world today and holds a PhD in devotional literature from School of Oriental and African Studies at the University of London.

“I come from a family of vedic scholars and after teaching in Bangalore for 3 years, I came to London in 1977 to do a doctorate in Sanskrit on the theme, ‘Krishna in our literature.” Nandaji, as he is fondly called met his destiny when he started helping out at the Bharatiya Vidya Bhavan and teaching Sanskrit part time in 1984.

He was made Academic Director of Bhavan from 1984-1994, in charge of all educational events and achievements by the then Executive Director, Mr Mathur and Chairman, Mr Maneck Dalal. At the same time, he started teaching Sanskrit at the prestigious Cambridge University as well as the Eton College. Not many can claim to be the teaching faculty in these premier institutes, which he continues even to this day.

Seeing his dedication and hard work, Nandaji was made the Deputy Director of Bhavan, under the leadership of Mr Mathur, to learn from the horses’ mouth. Nandaji took care of the administration of the prestigious cultural institute, when Mr Mathur had to go to India, and in 1995, he was made the Executive Director.  From March 1995, Nandaji has been at the helm of Bharatiya Vidya Bhavan, London.

For a person who has dedicated all his working years to an institution, the history of the institution becomes his life history. Nandaji says,”The Bhavan has been lucky in that there is no dearth of patrons—both Asians and Non Asians who contribute well to tide over any financial challenge the institute might have faced. We are doubly lucky in that we have eminent artists such as Bharat Ratna Pandit Ravi Shankar, his daughter Anoushka Ravishankar, Ustad Allah Rakha and his son the eminent artiste Zakir Hussain, eminent singers Dr Balamuralikrishna and Lata mankeshkar, as our patrons. They have been very generous to Bhavan, when it comes to concerts or workshops.”

Bharatiya Vidya Bhavan is one of the largest art and cultural organisation with 900 students  learning 23 different subjects of Music, Dance, Art, Archaeology and Languages.

“We are fortunate to have eight full time teachers teaching five days a week.  We conduct almost 80 programmes in a year and has featured almost every artist who has come to UK,” added Nandaji.

Nandaji remembers with pride how the current building of Bhavan which was an old church was inaugurated by then then prime minister Lord Callahan, when Lord Mountbatton was the patron- in-chief. The current patron-in-chief Prince Charles was the patron for an unprecedented two terms and a well wisher of Bhavan all along.

Speaking about the building, Nandaji informed with gratification, ”It is learned that Gandhiji, when he was in London in 1882, lived next door to the current building of Bhavan in an address No:20, Baron’s Court and used to frequent our church for their daily prayer meetings. This coincidence is all the more significant in that our founder Dr K M Munshi was an ardent follower of Gandhiji.”

Nandaji finds his association and work with Bhavan completely fulfilling in that it is a great opportunity to meet people from different walks of life. “Bhavan is a place where people from all over are welcome, irrespective of their colour, creed, caste, religion or politics. People who have a common interest in Indian culture, art and heritage come together at Bhavan.”

Nandaji believes that Bhavan functions as a bridge between East and West, and between contemporary and traditional art forms. “Herein Bhavan, we do a yearly programee of `Bhinna—Abhinna’ which means differences and oneness, where artistes from East and West come together to perform their own art forms and somewhere they will find their oneness, their similarity which is then celebrated. It is important to know that the art of appreciating culture and heritage has only one language,” said the scholar in Nandaji.

The sanskrit scholar believes that the ancient language is relevant more than ever at the present times, as it serves a special role in uniting people as it is the root to so many languages in India. “A few years ago, a movement was started in India to popularise Sanskrit and to make it a language which anyone can speak. The essence is to create an atmosphere where Sanskrit can be spoken and this is attained through the appreciation of ancient scriptures which are written in Sanskrit. Knowledge is not the property of any single community and it has to be made available to all,” added Nandaji. He also informed that while the number of students learning other languages may vary from time to time, the number of people willing to learn Sanskrit has always remained the same.

Nandaji is also the Chairman of the UK Sanskrit Association and has lectured on the Vedas, Upanishads, Mahabharata, Ramayana and the Gita to students from schools and colleges across Britain. At Bhavan, he has overseen the development and fund raising for three major projects to enhance their building, including support from the Millennium Commission and The Heritage Lottery Fund. He has also helped create a new art gallery in Bhavan as well as its new auditorium which can seat 300 people along with a studio, bookshop and the guestroom.

He has represented Bhavan abroad extensively and has been invited twice to South Africa to deliver keynote address at major conferences. Dr Nandakumara speaks four languages with a working knowledge of two more. As he belongs to a family of vedic scholars, Nandaji is frequently called upon to officiate in performing Vedic rituals and festivals.

He was awarded the Kannada Rajyotsava Award in 2011 for services to Indian arts and culture abroad as well as the Sanskriti Seva Samman by the Hindi Samiti of Britain.

Nandaji is settled in UK with his wife Janaki and a son and a daughter and four lovely grandchildren and dreams of going back to India sometime.