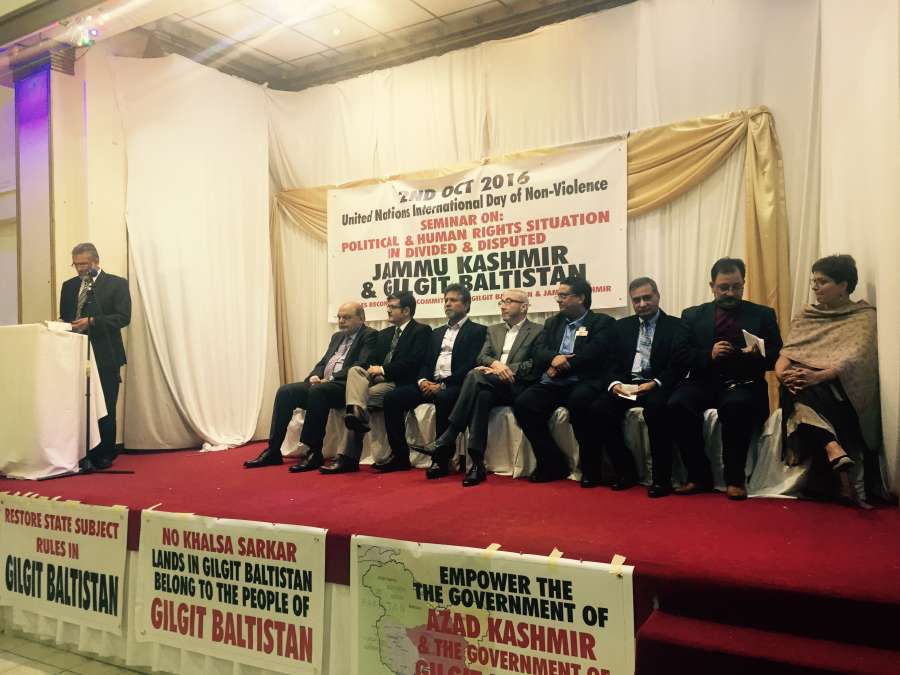 Advocate Malik made the opening speech and said that though Indian army has used excessive force to deal with the unrest in the Valley but the most important thing is we should look at the fact that how present situation and violence has taken birth. He said that this violence is being sponsored by Pakistan and that’s the real cause of the whole problem.

He condemned the atrocities of Pakistani establishment in Azad Kashmir and Gilgit Baltistan and supported all the demands being made by the PRC regarding the issues and rights of the people of Gilgit Baltistan and Azad Kashmir. He said that he was the only political worker present in the seminar who has visited all three parts of the state and has recently returned from the Valley.

Chairperson Kashmiri Pandits Cultural Society UK Lakshmi Kaul highlighted the atrocities by Pakistan and its constant interference in the region and said that it is the single biggest reason for the state of affairs in not just the valley but also the region. She said that the youth are being constantly misled and child soldiers created – if this isn’t human rights violation what is? She spoke about how the minority communities were being targeted and prevented from freely pursuing their faith, she paid her respect to brave souls like Arif Shahid who was killed because he spoke against the atrocities by Pakistan. Kashmiri Pandits have been living in exile and have been demanding justice – the murderers and perpetrators of human rights violation roam around freely.

She further said that the Indian army didn’t need to be in the valley if it weren’t for the armed insurgency by Pakistan. She said that there is a huge investment by Indian government in the state of J&K on developmental projects, MSME projects and to encourage business, trade and education. An interesting fact to note is that every time there is disruption, businesses in the valley move to other parts of India and not Pakistan. She said people want to live a life in peace and aspire for their children’s bright future.

She agreed to the PRC objectives and said that engaging is the only way to break barriers of hatred. She also congratulated Sajjad Raja and his team in bringing together all the different views and for conducting the seminar so well.

President JKNAP Middlesbrough Rizwan Siddique congratulated the PRC for holding such a marvellous event and supported the aims and objectives of PRC.

Professor Sajjad Raja welcomed the distinguished guests and all the community members and introduced the PRC GB & JK and told the seminar that PRC is a civil society which aims to bring all communities of the divided and disputed state of Jammu Kashmir and Gilgit Baltistan including Ladakh together.