Mr Bercow said Asian community in Britain is one of the most diverse and enterprising and contributed immensely to various sectors including business, political and culture.

Speaker Mr John Bercow was the chief guest at Asian Lite’s 10th anniversary celebrations. He urged the Indian diaspora in Britain to engage more with mainstream politics and get proper representation in Parliament.

“The community makes a huge contribution to British life, and I hope that its members will continue to build on its successes, both in terms of representation in Parliament and more widely across our national life,” said Mr Bercow. 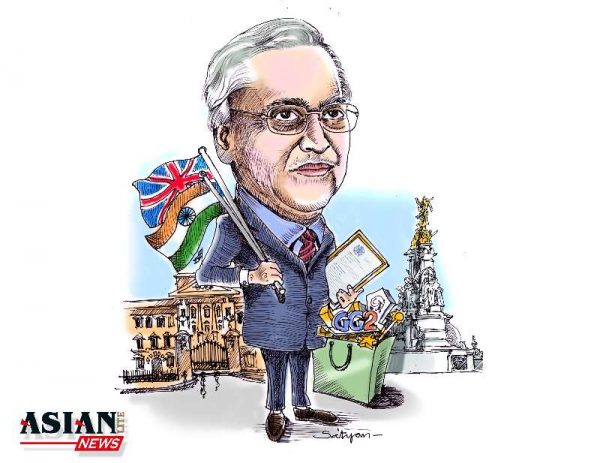 Dr Rami Ranger CBE is one of the most successful Indian-origin businessmen in Britain. His firm Sun mark Ltd won six Queen’s Award, a record, for export. Dr Ranger, the youngest son of martyred Indian freedom Shaheed Nanak Singh, began his life as a refugee boy in Delhi and now runs £200 million turn over company which exports products to 125 countries.

Having established his first enterprise with just £2 and a typewriter in 1987, Dr Rami Ranger, is an award-winning British entrepreneur, philanthropist and political reformer. He has come a long way from his humble origins and struggle at the refugee camp in Delhi. His business has received a record-breaking five successive Queen’s Awards and Rami himself has been awarded the CBE for his efforts to foster greater social and political opportunities for the British Asian community.

From rags to riches, Rami has proved that nothing is impossible in life if you stick to the five principles of life—self-respect, hard-work, commitment towards your work/ cause, vision and empathy towards others.

He offers lessons in business and life through his recently released book From Nothing to Everything. He firmly believes in the saying, “Excellence endures; it remains long after everything else is forgotten”.

Rami’s story is unique; he has risen from so low to great heights that only few can achieve. He has overcome tragedy and adversity to become one of the UK’s best known and most successful businessmen.

Born in July 1947 into a Sikh family in Gujranwala, now part of Pakistan, Rami’s childhood was full of struggle and trauma. His father was assassinated two months before his birth by religious fanatics as he was against the division of India on the basis of religion.

His mother was left alone with eight children aged from 2 to 14 including Rami who was just born then. Tension had gripped Pakistan, and like several other non-Muslim families, they too fled the country by train which was overflowing with people.

“Our journey to Patiala is a story in its own right. My newly widowed mother took her eight children the 115 miles by bus, foot and a horse-drawn cart, and we eventually arrived at a camp in Patiala, where we were finally able to rest….This is how my life began,” recalls the  recipient of Pride of India Award 2008.

“If to lose a breadwinner was not enough in a poor country, we also lost our ancestral home and country, and became refugees due to the division of India in 1947,” he said adding, “I did not have a rich family and in fact did not even have a father, no elite education, no old school boy network – yet today, I run two of the fastest growing companies in the UK.” Then, is it just hard-work or the blessings from Lady Luck that led him to the path of success? “Let me share with you what a successful golfer once said. He said ‘the harder I practice, the luckier I get’,” Rami, who moved to the UK in 1971 to study law.

He had imagined that life in England was easy where money grew on trees and roads paved with gold. But reality was different which made Rami, the recipient of several awards, realised how wrong he was. “England was completely a culture shock for me. I underwent a seismic change in my thinking,” he said.

Being an Asian, he faced various problems. “In the 70s’, Britain was different. People’s perception towards the immigrants was different but over time, we’ve proved ourselves with hard-work and a good track record of success,” said the award winning businessman.

Like other fellow countrymen, Rami who was awarded the NRI of the Year Award by Times Now Group in Mumbai this week, realised that the only way to overcome obstacles in a new country is to work harder than his English counterparts, and to survive as an immigrant, “we had to give more and accept less”.

He said, “When things become tough, you’ve to work harder, and go where there are more opportunities.”

“Opportunity knocks your door only twice in your lifetime; one, when you are in college or university and the other, when you work for someone, that’s the time when you’ve to make the most of it,” said the 66-year-old, who was fun-loving but lazy with studies.

Asked whom does he owe his success to, Rami said, “There are many people but my mother who brought us up single-handedly after she lost her husband tops the list. Then India– the country where I grew up and learnt how to be secular and move ahead in life with a positive attitude.

“I also draw inspirations from Sikh gurus and Mahatma Gandhi who stood for the people and showed us the way,” he added.

And, to be successful in business, Rami, whose company won six Queen’s awards, advices that one should be committed and strive towards achieving one’s goal.

The award winning businessman whose company made a remarkable record of profit when other businesses were struggling suggested that one should look beyond one’s boundary. “When things got tougher, we decided to grow in those areas which were booming,” said the founder of Sun Mark food firm, which has introduced brands such as Bulldog Energy, Golden Country and Pure Heaven drinks to retailers.

Further, he maintained that international trade is the “Lifeline of Britain”. “We need to look beyond our shores,” he stressed.

However, for Rami, investment in India “is still a dream but the system there is not that friendly where you can invest easily.”

Despite his busy schedule, he diligently works to build bridges between communities in the UK. “It’s always good to promote a good cause, it will benefit everybody,” said Rami who launched Pakistan, India & UK Friendship Forum. For him, to stand-up for a cause is also equally important as being successful in business. “Nothing is easy but you’ve to make time for it,” he added. The Forum made history when people of India and Pakistan celebrated jointly celebrated the 60th Independence Day of their respective countries in London.

He also pointed out that leaders back-home (India and Pakistan) “have to put people’s interest before anything else; war is not the solution, and religion should never be used as a weapon to divide mankind.”

A visionary in his own way, Rami who still has several unfulfilled dreams, aspires to do something big for mankind. “I want to leave behind a legacy which is larger than life and not just be remembered as a person who minted money,” he added.