Eight days after a horrific terror attack in Belgium left 34 people dead, an Indian working at the Brussels airport says the country is yet to recover from the trauma. But the carnage has brought together Indians of all hues living in the country.

Those who survived the twin explosions at the Zaventem Airport departure lounge, with or without injuries, feel their lives have changed forever, Andre-Pierre Rego said.

Mumbai-born Andre came to Brussels in 1983 to pursue studies. He ended up staying on in the country, and now works at the Brussels Airport with the Swissport Lost and Found Baggage Tracing Service.

Andre was on duty when suicide bombers detonated themselves in a crowded section of the airport on the morning of March 22.

Andre escaped unscathed but the deafening blasts have affected him deeply — and changed forever the lives of those who were at the departure hall.

“The departure area was thronging with passengers checking in for international flights out of Brussels when all of a sudden (there was this massive) bang,”
“You cannot explain in words the actual effect of a bomb exploding,” said Andre, who has previously worked with Jet Airways.

The first explosion itself triggered chaos.

“(There were) bags everywhere, people (were) running towards the two remaining exits, screaming in shock and pain, through thick smoke,” Andre said.

“And 20 seconds later there was a second bigger explosion at the other end. That’s when the ceiling came crashing down.

“There was more screaming as panic stricken passengers and airport staff ran towards the only available exit in the middle of the departure hall. While the injured ran, the lifeless and panic-stricken lay still,” said Andre.”

In no time, the departure area looked like a war zone, after the heavy amount of explosives used by the suicide bombers ripped through machines, baggages, electric fittings and the false ceiling.

There were body parts — and blood. And pain. 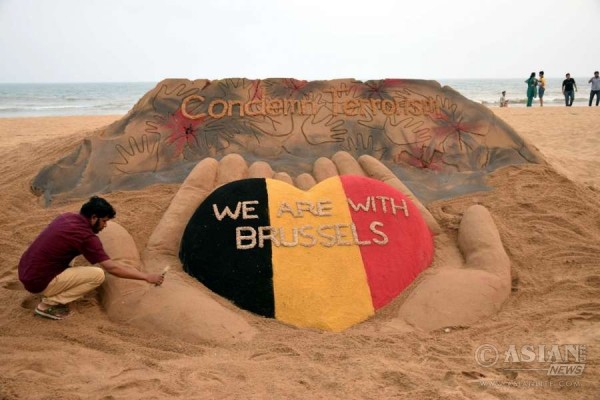 “People climbed and jumped over bags, baggage trolleys and even over each other to get out through the only door though the shattered glass had left gaping holes wide enough for them to exit. But the human mind cannot think logically,” Andre said.

At least 15 people died in the airport. The others were killed in an equally powerful explosion that ripped through the metro carriage in the heart of Brussels, near the European Union headquarters.

The Islamic State claimed responsibility for the attacks.

An Infosys employee, Raghavendran Ganeshan, was killed in the explosion at the metro station. Two crew members of Jet Airways were also injured at the airport.

One of them, Neha Chaphekar, became the face of the terror after her photograph was widely published by the Western media.

Andre said the Belgian capital “was overwhelmed with sirens of ambulances, police cars and fire brigade racing to transport the injured to the 25 different hospitals.

“Many of the injured are still in Intensive Care. The death toll can still rise.”

Before the mobile network got jammed, Andre’s sister from India sent a text message enquring about his welfare.

“That was the only moment when I actually did feel tears welling in my eyes. I said I was ok. She messaged back: ‘Praise God. I love you. Just realized how much’.”

“It has brought us closer and made our friendships stronger. Religion doesn’t matter. Indians in Brussels remain Indians. We are strong-minded and our upbringing teaches us to live in harmony. Generally, we succeed.

“On March 23, Holi was being celebrated in India. I remember messaging a friend in India that we should brainwash the jihadists to fight a ‘Holi’ war and to use guns with coloured water as ammunition,” Andre said.