Theresa May has a reputation for being balanced, strong, commanding with an awareness of the complexity and sensitivity of the issues at hand; someone who can skilfully speak for us all as a United Kingdom….writes Reena Ranger 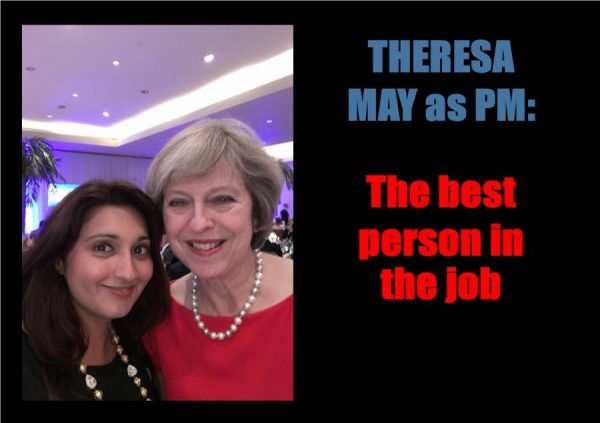 The Conservative Party has always been a meritocracy and we have not deviated, we now have the best person for the job. Theresa May is our new Prime Minster. The notion that that the next PM should only have been from the Leave campaign was flawed. We did not need anyone with a personal agenda that was needed to be possibly proven at any cost. Many “exiters” were economical with the truth on the campaign trail and as a big red bus tells us, that some of their grasp of economics was questionable and this has left so many people disillusioned.

In Mrs May we have a pragmatist, someone who works for the best interests of the United Kingdom as a whole, these are uncertain and new waters and there is much at stake. The nation is threatening to split and we need a unifier, someone who understands that the young need to feel secure that their future is in safe hands. Those who feel unheard by the establishment need a champion to address the reasons they feel that they have been let down. Those areas that strongly voted to remain need a voice and those who strongly wanted to leave need a new relationship.  The task is complex and needs someone with skill, experience and a level head.

The country has gained an experienced negotiator who can seek to skilfully execute Brexit on the best possible terms, someone who has the ability to strike new trade deals and forge new relationships.  A Prime Minister whose focus is on running the country as a whole and not just focused on one aspect of it.  The disappointing myopic vision of some exiters seemed to lead them to not understand that the vote of June 23rd was not the end, but just the start. This is not the time to resign but to start the real and tough task ahead. What lies before us now is years of talks and negotiations but cannot be at the expense of domestic legislation and progress.

We have gained the level headed realist we needed who will approach the table with an open mind and fair hand and has a proven track record; she is someone who has taken on tough jobs and won over and over again. She is the longest serving Home Secretary and faced challenges and overcame them in spite of the odds. Our next Prime Minister is someone who has spent years simply getting on with the job and this will hold her in good stead.

She has a reputation for being balanced, strong, commanding with an awareness of the complexity and sensitivity of the issues at hand; someone who can skilfully speak for us all as a United Kingdom.

Mrs May is known to be a Eurosceptic remainer and perhaps this really is the right balance in negotiating this most sensitive of situations.  She is aware of what collaborating with the EU can achieve and the opportunities it can provide but is aware of its limitations and flaws.

She has the support of the vast majority of Conservative MPs.  Through the experiences of other political parties we have seen how vital this support is for a leader to lead effectively, command respect and set a direction for the party and in this case, the nation.

I believe Theresa May will bring the party and country together. She has the right combination of skills, determination and experience. It is that mixture that is now vital. At this crucial, sensitive and unfamiliar time we need a serious, experienced, reasoned and measured pair of hands to entrust the future of this great nation. We needed and have Theresa May for the job!