Baroness Sayeeda Warsi, the former Chairperson of the Conservative Party, said the new plan to educate English to immigrants is lazy and stereotyping of British Muslim communities

“I absolutely agree with the government’s announcement that it’s important for more money to be put into English language teaching, because a shared language of course is a must for strong, integrated communities, what raised concerns for me was the way in which a very good announcement would be linked to extremism and terrorism,” Baroness Warsi, once a confidante of Cameron, told BBC Radio 4.

“And this lazy and misguided linking and what I saw once again was stereotyping of British Muslim communities. I felt took away from what was a positive announcement.”

The former Tory cabinet minister, who quit the government in 2014 over Gaza, said Cameron should not single out Muslims. 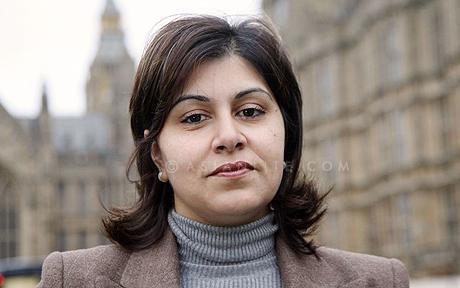 “To singularly point out that British Muslim women don’t speak English and that therefore leads to radicalisation and therefore only they should be taught English is a very odd way of pursuing an integrated approach to community cohesion,” she said.

“But I think to threaten women and say to them that ‘unless you are of X standard we will send you back even if you have children in the United Kingdom who are British and your spouse is British’, it’s for me a very unusual way of empowering and emboldening women.”

Andy Burnham MP, Labour’s Shadow Home Secretary, responding to David Cameron’s plans to set up English classes for Muslim women to ‘tackle’ radicalisation, said: “In his desire to grab easy headlines, David Cameron risks doing more harm than good. His clumsy and simplistic approach to challenging extremism is unfairly stigmatising a whole community. There is a real danger that it could end up driving further radicalisation, rather than tackling it.

“Cameron and his Conservative Government are once again using British Muslims as a political football to score cheap points to appear tough,” said Mr Shafiq. “There are three million Muslims in this country and the Prime Minister chooses to focus on a very small minority of extremists when clearly the majority of British Muslims reject extremism.

Zubeda Limbada, founding director of anti-extremism think tank Connect Justice, said: “If David Cameron’s ultimate goal here is to champion disempowered women to learn English to take part in matters affecting their lives and addressing segregation then of course I welcome it, particularly as a woman. I feel that this isn’t just a Muslim woman’s issue, it affects all of us.

“The problem with the headline is that he’s framing this in the context of extremism, so it’s not only incorrect when you conflate segregation, gender rights, social mobility within the purview of extremism but there’s also no link between the evidence that any of the 700 cases of extremism, of people going to Isis and to Syria could have been stopped if their mothers had spoken English or learnt English. There simply is no evidence.
“It sometimes feels like the government is lacking practical ideas when it comes to tackling extremism as well.”

Anjum Anwar, chair of charity Woman’s Voices, said she was concerned about the links being made speaking English and radicalisation.

Shuja Shafi, secretary general of the Muslim Council of Britain, said: “The Prime Minister is absolutely right in wanting English to be taught more widely.

“Mosques and Muslim civil society would be eager to play their part by hosting English language classes, as many mosques do.

“But the Prime Minister’s aim to have English more widely spoken and for better integration falls at the first hurdle if he is to link it to security and single out Muslim women to illustrate his point.”