Radhika Swarup’s first novel “Where the river parts” is now the toast of the London literary circle. It brings back the painful memories of partition….writes Rajitha Saleem 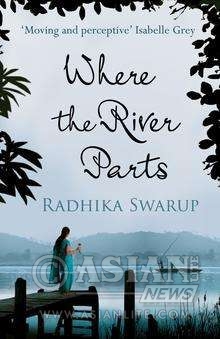 Another heart-warming and poignant book on the pain and disquiet left behind by partition—a gentle reminder that not even half a century or even travelling to another half of the world can make you escape those agonising moments—Radhika Swarup’s first novel `Where the river parts’, opens up the pain and struggles of leaving what people called their homeland and migrate to another land and live there to make it their motherland.

‘Where the river parts’ was launched by Alef Bookstores at Baker Street in London. Radhika, who herself is a third generation migrant from Pakistan, read a few excerpts from the book, which is basically a story of love lost and found after many years.  It also dwells upon the very important question of choice, which one encounters in situations which can change lives.

The book is based in part on the stories shared by her own family, who were originally from Pakistani Punjab and migrated during the brutal months of Partition in 1947. Radhika also lived in Karachi, Pakistan in 1992, where she saw first-hand both the warmth of the people as also the complexity of the official Indo-Pak interaction.

“The partition and the travails people had to undergo during and after that, offers such a rich canvass for stories to emerge. We grew up listening to happy stories about my maternal grandmother’s village called Lyallpur which is now called Faisalabad, its market, the roundabout and the happy life there. It was only in the later years that they shared their chronicles of how they had struggled to leave behind their homeland and make Delhi their new home,” Radhika told Asian Lite.

Radhika Swarup spent a nomadic childhood in India, Italy, Qatar, Pakistan, Romania and England, which gave her a keen sense for the dispossessed.  She read Economics at Cambridge University and worked in investment banking before turning to writing. She has written opinion pieces for Indian broadsheets and the Huffington Post as well as short stories for publications including the Edinburgh Review.

“I used to listen in amazement when my grandmother and her six siblings would talk about their lovely home in Pakistan,” informed Radhika.

`Where the river parts’ has already received rave reviews in the literary scene, where Isabelle Grey who wrote `Good Girls Don’t Die’ stated that it was ‘A perceptive story of love swept aside by history.’ Nayomi Munaweera, author of Island of 1000 Mirrors, said that the novel was ‘A heartbreaking story…on a chapter of South Asian history that has often been deemed too painful to be explored fully.’

Radhika said that she was happy with the reception that the book has received in the first week of its publication where amazon has rated it 4.9/5 and is widely accepted by the audience back home. She has already started work on her next novel which plots the life of a woman whose existence is questioned overnight and how she deals with the change.

The book launch was followed by a lively discussion on partition, India-Pakistan relations, the Syrian refugee crisis and the literary process.