The proposed Chabahar project binds Iran, India and landlocked Afghanistan to a mutually beneficial economic cooperation besides providing a tool for the growth of Central Asia….writes Samuel Baid

There are no two opinions that the trilateral agreement Iran, Afghanistan and India signed on May 23 on development of Chabahar port of Iran, proves not only boon for the signatories of the agreement but also for Central Asian Republics (CARs) and other states as well.  It goes without saying that the Chabahar project brings the three countries into a closer partnership.

The inauguration of the Salma Dam in militancy-affected and partly drought–affected Herat region in Afghanistan by Afghan President Ashraf Ghani and Indian Prime Minister Narendra Modi was a proof that despite terrorism India will not leave Afghanistan alone. In fact, the inauguration of the $290 million Salma Dam by Modi and Afghan President Asharaf Ghani in Herat was a fulfilment of India’s commitment to reconstruct the economic infrastructures which the Taliban had ruined during their six-year rule in Afghanistan and which were destroyed in US bombing to rid this country of the Taliban rule.

Constant droughts parched the land in Herat and forced its young people to go to neighbouring Iran in search of jobs.  Now things will definitely change in the villages of Herat.  This dam, besides watering the parched land in Herat, will also give it 42 MW of power for its industry. President Ghani also honoured Modi with the highest Afghan civilian award Amir Amanullah Khan.  The Indian Prime Minister Modi said India will along stand by Afghans against all odds.

On the other hand, India and Iran are wedded in ancient history of relations. Chabahar is a familiar name in India.  In 2003, when Iranian President Mohammad Khatami came to India, the idea of Iran and India building a port in Chabahar was first mooted by the visiting dignitary. India welcomed the idea.  But before the two countries could take steps towards that direction Iran was put under international sanctions because of its nuclear programme.  It was only after these sanctions were lifted that Iran emerged as a potential trading partner.  A contributory factor was also the lifting of the sanctions imposed by the US in 1979.

A government-owned Urdu newspaper Imroze had reported then that Indian goods going to Afghanistan were pilfered and openly sold in Pakistan’s market. Similarly, the Iran-Afghan road link will free Kabul of terrorist attacks on trucks bringing goods to Afghanistan.  This new route to Afghanistan from Iran would tremendously help India not only to increase the quantum of trade with Afghanistan but also find new avenues of trade and political relations with the energy-rich CARs which traditionally enjoyed closeness to India when they were part of the now defunct USSR.  Last year PM Modi visited all these states. Conversely, Afghanistan and CARs will immensely benefit by the Iran-Afghan connectivity to revive their cultural trade and political relations with Iran and India.

Construction of the Chabahar port and connectivity to Afghanistan have a bonus point for Iran. Wahabi Sunni Saudi Arabia was trying to isolate Shia Iran in West Asia. Saudi Arabia has formed a  34-nation alliance to fight terrorism.  Iran, along with Afghanistan, Iraq and Syria, was kept out of it.  At present it seems that the Shia-Sunni divide in West Asia is  getting out of control.  But it is expected that secular India’s involvement in Chabahar port will have a defusing effect because its non-sectarian but not ungodly profile is acceptable to Sunni Saudi Arabia and Shia Iran both. Thus India can emerge as a strong non-sectarian force in the region to promote trade relations. The force of trade relations may slowly start to corrode the sectarian leanings.

The proposed free trade zone in Chabahar area should encourage this trend, as the zone will offer new investment destination.  Indian companies will stand to gain a lot from this opportunity.  The Indian government says its companies have plans to set up plants in sectors such as fertilizers, petrochemical, and metallurgy.  India will also supply steel rails to Iran for building the rail link.

Moreover, the new Afghan Ambassador to China said his country supported the CPEC and wanted it to be extended to CARs.  In an interview to China’s state-owned journal “Global Times”, the Afghan ambassador Janan Mosazai said Kabul enjoyed importance and vitality of relations with China but with India it had extraordinary close ties so far i.e. before the Chabahar Port project becomes functional, of the three, two signatories support the China-built Gwadar Port in Pakistan and the CPEC.  India has its reservations because the whole CPEC project trespasses a territory which neither belongs to Pakistan nor China. Both Pakistan and China are conscious of this reality. 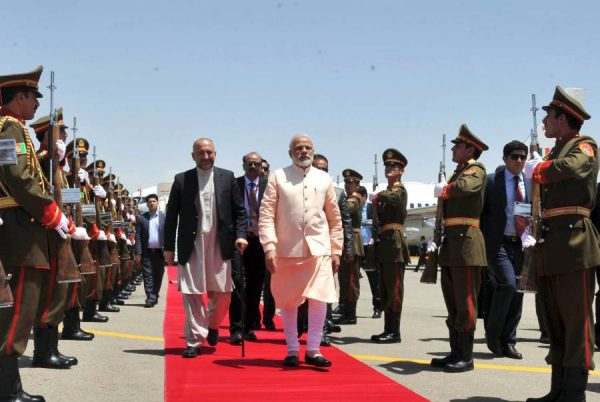 In Pakistan, there are two views on the Chabahar Port project.  A DAWN report says the civilian government and the military establishment hold opposite views on the project.

Prime Minister’s Adviser on Foreign Relations Sartaj Aziz, according to the Pakistan Today, echoed Iranian ambassador’s view when he said that the Chabahar and the Gwadar Ports could be developed into allied ports and a cooperative agreement could benefit both Iran and Pakistan. Aziz said Pakistan welcomed projects of regional connectivity which have potential to generate economic activity.  But the military view, as reflected in the statements of former defence secretaries and retired Army Generals, is that through the Chabahar project, Iran, India and Afghanistan have posed a threat to Pakistan and have tried to sabotage the CPEC projects. Incidentally, the CPEC project, nicknamed as white elephant, is moving very slowly.

Former defence secretary Gen. Asif Yasin Malik fears Pakistan’s isolation because of an Iran-India-Afghanistan Alliance.  Another former defence secretary Gen. Nadeem Sodhi called it a formidable bloc which Pakistan should break out. A retired General Nadeem Lodhi said this formidable bloc was the result of the dysfunctional foreign office and the absence of a full time foreign Minister.

According to another DAWN report, China does not see Iran–India– Afghanistan alliance to build the Chabahar Port as a threat to Gwadar Port or to the CPEC.  Chinese Prime Minister told Asian journalists in Beijing that Chabahar project could not be an irritant to China’s ‘One Belt One Road (OBOR)’ project that plans to connect over two dozen countries for the purpose of trade. He said his country might even like to benefit from it.

As these developments seem to very positive for regional connectivity, cross-border trade and economic development, it would be interesting to observe whether the paranoid Pak Army and its intelligence establishment and retired officers would eventually get over from its encirclement phobia.