A lorry packed with explosives was detonated in the Karrada district while families were shopping for the holiday marking the end of Ramadan. Rescuers said whole families had been wiped out and many victims were burned beyond recognition.

It has been reported that it is Daesh has said that it carried out the suicide attack. Prime Minister Haider al-Abadi visited the mainly Shia area on Sunday but his convoy was greeted by angry crowds. His office later announced the three days of mourning, adding that Mr Abadi understood the angry reaction of residents.

As night fell on Sunday, teams of workers were still clearing debris from the site and searching the charred remnants of buildings. The bombing at around midnight on Saturday was the deadliest in Iraq this year and came a week after Iraqi forces recaptured the city of Falluja from Daesh. 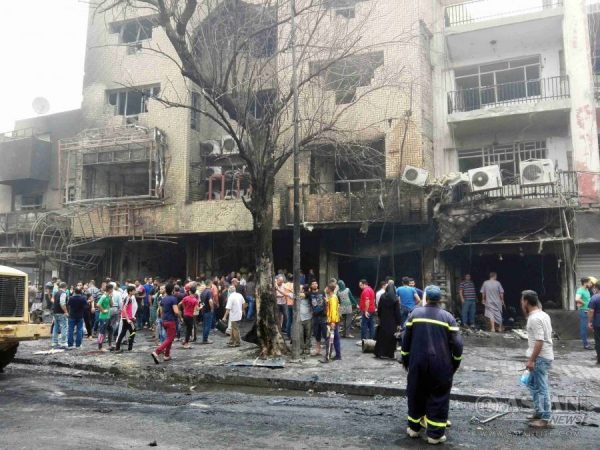 Reports said a refrigerator van had been packed with explosives and left near the popular al-Hadi Centre. Footage from the scene in the minutes after the blast showed the whole area engulfed in flames.

“We need a number of days to be able to recover the bodies of victims. It is a difficult task,” a member of the civil defence forces quoted by AFP news agency said.

A second bomb exploded shortly afterwards in another predominantly Shia area north of the capital, killing another five people. Daesh, which follows its own extreme version of Sunni Islam, said in an online statement that the attack in Karrada was carried out by an Iraqi as part of `ongoing security operations’.

The US said on Sunday that the latest attack strengthened its resolve to support Iraqi forces in their fight against Daesh. “We remain united with the Iraqi people and government in our combined efforts to destroy ISIL,” the White House statement said, using another term for the group.

UN Iraq envoy Jan Kubis described the violence as a “cowardly and heinous act of unparalleled proportions”. He said that Daesh militants who have “suffered defeats at the battlefront are seeking to avenge their losses by targeting vulnerable civilians”.

Later on Sunday, Mr. Abadi also announced increased security measures including the scrapping of “magic wand” fake bomb detectors which are still being used at checkpoints in Iraq despite being exposed as a scam several years ago.

He also ordered that improved vehicle inspection systems be installed at entry points into Baghdad and in other provinces.