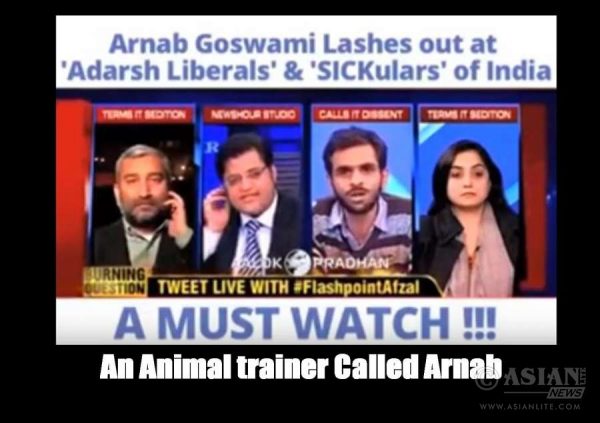 Arnab Goswami of Times Now Television runs his show rather like an animal trainer in an old fashioned circus or an Al Capone-like gangster terrorising his minions, which is what the panelists palely peering out of those windows begin to look like, by the time Arnab is through with them.

It is in this galaxy that Sambit Patra, BJP spokesperson, has been shining these past few days with incomparable light. Arnab runs a clip showing Kanhaiya Kumar and his friends, raising their hand and throwing their heads back. There are no words, only cacophony. Sambit Patra provides the missing slogans. “Afzal hum sharminda hain; tere qatil zinda hain.” (Afzal Guru, we are embarrassed that your murderers roam free).

Flushed with success from Times Now where, with Arnab Goswami, he had helped viewership ratings skyrocket on the JNU issue, Patra turned up at the India Today Television, to test his luck. He will rue the day he accepted anchor Rahul Kanwal’s invitation.

Shouting slogans in support of Afzal Guru is a powerful allegation against the JNU demonstrators. This has become particularly so for the millions who watch Arnab’s show. This vast viewership is liable to swallow the allegation unhesitatingly simply because it does not have the background. This audience does not know that the anniversary of Afzal Guru’s death has been observed all the three years since his hanging – religiously in Kashmir and in liberal enclaves like Jawaharlal Nehru University.

True, Afzal Guru’s crime was heinous. He was supposed to have master-minded the December 13, 2001, attack on the Indian Parliament, barely three months after the 9/11 attack in New York.

The Supreme Court judgement handing him the death sentence did not satisfy everybody. The Honourable Court admitted that the evidence was circumstantial, but went on to argue that the “collective conscience of society will be satisfied only if the death penalty is awarded to Afzal Guru.” Critics found it unfortunate that a court of law decided to pander to its assumed notion of “collective conscience” rather than abide by points of law.

The hanging too was most mysterious. Without informing his family, Afzal was secretly hanged and buried in Tihar Jail. Since then there is a demand in Kashmir for his remains to be returned to the family. Is it an unfair demand?

In Kashmir, Afzal Guru is not a closed chapter because of the circumstances attending the disposal of the case. But buoyed by political power, this time the Sangh Parivar decided to push for charges of sedition against Afzal Guru’s sympathisers.

This is part of a larger game spelt out in an article in The Pioneer published in June 2014 soon after Modi came to power. The author K.G. Suresh is a versatile journalist and a member of the Sangh Parivar think tank. He said: “Augean stables of that hallowed institution called JNU must be cleaned. They have over the years, become dens of secessionism, Maoism and terrorism.”

Was it not Subramanian Swamy whose name was being mentioned as the possible vice chancellor? He showed his hand the other day when in the context of the current agitation he asked for the university to be shut down for four months. But for the time being, sedition charges on the leftist union leader would suffice.

For this line of action to succeed, choreography of the whole Afzal Guru show in JNU would have to be couched in clear cut anti-India rhetoric. In this, the Sangh Parivar goofed up in its coordination with the JNU authorities and the police. First, the vice chancellor permitted the show. But when the youth wing of the Parivar, ABVP, protested, the permission was withdrawn.

The university administration’s indecisiveness became yet another nugget in what to me has been the finest piece of oratory since the days of Prakash Veer Shastri and Atal Bihari Vajpayee. In his February 9 speech, Kanhaiya Kumar “left the audience spellbound” according to eye witnesses. It was imaginative of the Indian Express to have published an English translation of the speech under the title “Is this Sedition?”

By then sundry activists of the Sangh were on the move providing lethal voiceovers to clips showing Kanhaiya and his friends shouting inaudible slogans which were alleged to be anti-Indian. And this found an echo in a credulous Patra and less than sceptical Arnab.

“We shall avenge Afzal Guru’s killers; we shall break up the country; Pakistan Zindabad and worse.” We have Sambit Patra and Ravi Shankar Prasad’s testimony that this was the anti-national fare dished out at the JNU gathering.

Secure in the conviction that he had won the propaganda war for the Sangh Parivar-ABVP, Sambit Patra sought to push his luck a little further with a different channel – India Today Television.

Rahul Kanwal’s advantage is that he is a reporter as well as an anchor. First, with great craft, he lulled Patra into a sense of false security. How cleverly had Patra been channel-hopping armed with the video clip of Kanhaiya’s supposedly anti-national sloganeering which has been dominating “some channels”, Rahul said.

He then led Patra to an in-house computer whizkid who, quite expertly, separated the Kanhaiya clip of February 9, with crisp and clear sound quality from the doctored clip of February 11 where the sound has been deliberately muffled to warrant outside commentary – Patra’s in this case.

Rahul’s sifting of the grain from the chaff left Patra tongue-tied on live TV. He made cow eyes at Rahul; he looked like Surma Bhopali caught lying within Amitabh Bachchan and Dharmendra’s earshot in Sholay.

Meanwhile, Kanhaiya has in his speech challenged the ABVP to debate him on nationalism. This is the crux of the matter. Here is a TRP spinner for the channels to pick up. Or at least the speech can be telecast so that the nation can distil the truth from the concoction the ABVP and the police have poured into the JNU cauldron.