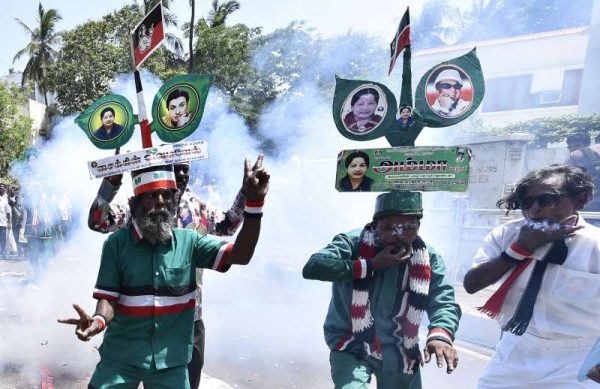 West Bengal’s ruling Trinamool Congress and Tamil Nadu’s ruling AIADMK were set to retain power on Thursday as the BJP was on the road to victory in Assam and the Left made a comeback in Kerala.

On expected lines, the Trinamool was sweeping all across West Bengal as officials counted the millions of votes polled in the staggered assembly elections. Its candidates led in 199 of the 289 places where trends were available two hours after the vote count began at 8 a.m.

The Left and the Congress were at a distant second spot, leading in 37 and 41 constituencies respectively. The Bharatiya Janata Party (BJP) was leading in 12 places. The West Bengal legislature has 294 members.

In Tamil Nadu, the AIADMK proved exit polls wrong as it appeared on the course to retaining power. Its candidates led in 132 constituencies, with the DMK-Congress alliance in the lead in 69.

The PMK was ahead in four places. The Tamil Nadu assembly has 234 seats.

As an AIADMK win appeared certain, boisterous celebrations erupted outside the residence of party leader and Chief Minister J. Jayalalithaa in Chennai.

Unlike in West Bengal and Tamil Nadu, the governments were set to change in Assam and Kerala.

The BJP was on the road to victory in Assam for the first time. Its alliance candidates led in 65 constituencies, followed by the Congress in 28 seats. The AIUDF led in 17 places.

Assam has a 126-member legislature.

LDF candidates led in 85 seats and those of the UDF in 53 as trends were available from all the 140 constituencies. The BJP was leading in one seat and a smaller party in another.

The DMK-Congress alliance and the All India N.R. Congress were in close contest in Puducherry, leading in 10 and nine constituencies respectively. The union territory has a 30-member assembly.