After 70 years, democracy is finally arriving at the UN for the election of its next head. It will also be the first with women running for the top job. Secretary General Ban Ki-moon’s successor is to be chosen in a process that will be “historic and game-changing” with an open election campaign, General Assembly President Mogens Lykketoft announced . It will replace the Security Council’s secretive backroom deal-making of the past that India and many other countries have opposed.

This will be the first time that candidates will come before all the members of the UN for an American-style campaign Town Hall meeting where candidates face questions about their policies and plans, but do not directly interact with each other like in a debate.

Lykketoft said that three women are among the six running to succeed Ban, whose term ends this year. The emergence of women candidates is another historic development and it is almost certain that one of them would be elected as there has been tremendous pressure from civil society groups and international leaders to elect a woman. Irina Bokova, the Bulgarian head of Unesco, is widely thought to be the front-runner.

The Assembly will hold over three days in April a “dialogue” with the six candidates nominated by their governments and any others who announce their run by then, Lykketoft said. The meetings will be “open and transparent” and even civil society organisations will participate, he declared.

And, the Assembly will have a chance to evaluate them and influence the election instead of rubber-stamping a Security Council choice. 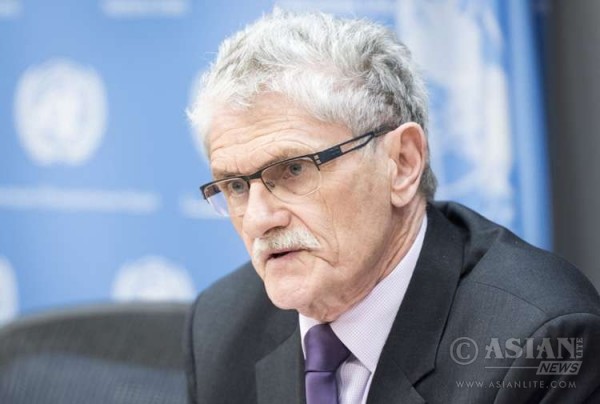 Lykketoft told reporters the organisation was now heading into the “unchartered territory that the General Assembly takes on itself with these informal talks” with the candidates.

Asked if this could mean that the Assembly can actually determine who the next secretary general will be, Lykketoft said that “this could be a game-changer if all the countries come together with one candidate” in the Assembly whom the Council accepts because of the overwhelming support for that person.

He also said that it would be possible for the Assembly to vote down every candidate proposed by the Council until the one it favored is proposed. But he added that this scenario was unlikely.

Answering a question whether a permanent member of the Council could veto the selection of a candidate, Lykketoft said that though this has been the tradition so far, “it is very questionable there is a veto power on a procedural issue” like this.

All the eight secretaries general in the UN’s 70-year history have been men and although a system of regional rotation has been in place since the election of Myanmar’s U Thant in 1961, no East European has held the job. Now it is a European’s turn to follow Asia’s Ban and East Europe is staking it claim, giving the women from the region an edge.

India has advocated an open selection process for the secretary general like the one adopted now and the Assembly having the choice of several candidates. Last April, India’s then Permanent Representative Asoke Kumar Mukerji told a panel on reforming the election process that the Council should present a slate of candidates, rather than just one, to the general assembly, which should elect one of them by two-thirds of the votes.

Lykketoft noted this suggestion and another to limit the secretary general to a single term but longer than the present five years. A decision has yet to be made on these, he said.