Despite elephant-headed Ganesha being widely worshipped across India, at least 100 elephants die every year in the country, with many poached for ivory and many more captured and sold to traffickers.

Incidents of cruelty against elephants are many. The most recent being the rescue of a “begging elephant” from Uttar Pradesh after five decades of slavery, and also the seizure of 536 kg ivory in Kerala.

Years of exploitation has made the Asian elephant an endangered species, while their African counterparts too have become vulnerable.

On World Elephant Day on Friday (August 12), the torture faced by this majestic animal that is behind many a joy ride, circus performance and even temple blessing calls for more sensitivity towards treatment of the elephant and enforcement of established norms, say experts.

“It takes about six months of consistent torture to break an elephant calf’s strength and courage in order to domesticate it — thereby making it fit for sale,” said Kartick Satyanarayan, co-founder of animal conservation organisation Wildlife SOS.

For a juvenile elephant the degree of the torture is three times more in order to “break it”.  After this “orientation” — which involves starvation, piercing of the ears with hot iron rods and pulling a rope through the pierced holes to restrict its movement, these animals are sold to circuses, temples, the timber-lifting trade or safaris for further training and service.

This is where it faces more beatings and undergoes painful training where bullhooks or elephant goads are used to jab it near the neck and head, in order to control it.

“Many owners who claim that they care for their animals do not tell the whole truth. They cannot manage elephants without using an ankush or a bullhook, which is extremely cruel and is illegal to use,” Kartick says, referring to the case of Rambo Circus in Pune, where four elephants, including one which was blind, were rescued in June. However, they were returned to the circus due to legal loopholes.

“Several states in North America have prevented the performance of elephants by banning the use of bullhooks on the grounds of cruelty. Circuses cannot train elephants without these cruel tools of torture,” he added.

According to elephant biologists, without the methods of torture it may take up to six years for a calf to become submissive.

“They are being trafficked and poached from everywhere. Be it West Bengal, Karnataka, Uttar Pradesh, Uttarakhand, Odisha, Andhra Pradesh or North-east,” said Shekhar Kumar Niraj, Head TRAFFIC, WWF-India.  He estimates the annual figure of elephant poaching to be around 30.

As per the Union Environment Ministry, there are over 30,000 elephants across 16 elephant states in India. About 4,000 are in captivity.

In Southeast Asia, nearly 40,000 Asian elephants are distributed across 13 countries.

As per a 2010 report by Asian Nature Conservation Foundation (ANCF) most of the elephants in India are illegally acquired. The experts often find forged paperwork as the easiest way to legitimise the trade.

“Kerala, like Bihar, sources its elephants mainly from Assam through Bihar’s Sonepur mela,” the report stated. Kerala has the maximum number of captive elephants.

It is estimated that at least 800 elephants were sold in Bihar, Kerala, Tamil Nadu and Rajasthan between 1997 and 2002.

Rajasthan’s Amber area in Jaipur is also considered a hub of elephant trafficking.

The trade goes on despite existing laws such as Prevention of Cruelty to Animals Act 1960; the Performing Animals (Registration) Rules 2001; The Indian Wildlife (Protection) Act 1972; and Recognition of Zoo Rules, 2009.

Animal experts say that by the time elephants are rescued, they develop psychological disorders and are unfit to be released in the wild due to the extensive damage done to them. One such common disorder is swaying the trunk.

“Sometimes by the time we reach the elephant after overcoming legal hurdles, it’s too late,” Kartick said.

With over 22 rescued elephants, Wildlife SOS runs two elephant conservation and care centres in Mathura, Uttar Pradesh, and in Haryana.

In India, less than 100 elephant corridors remain in the wild, with many dysfunctional and all shrinking, restricting the movement of elephants — providing a perfect ground to hunt them, say experts. 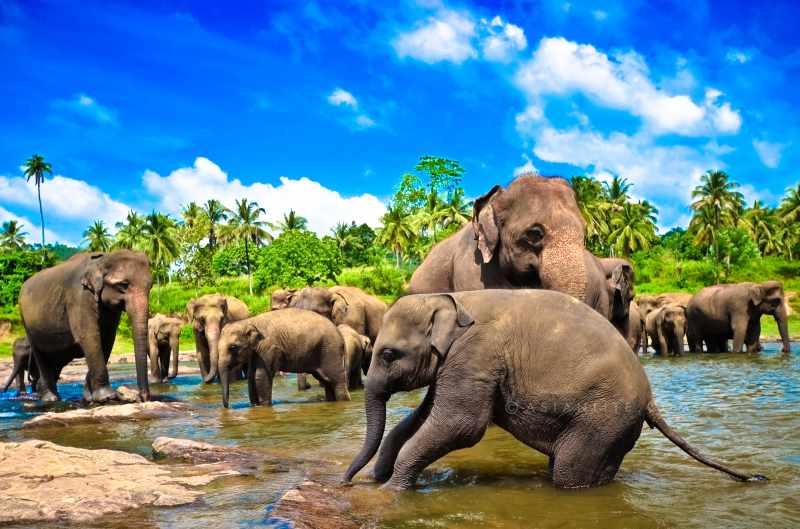