It is believed that three attackers were involved in the deadly attack in the Istanbul attack, with one reportedly opening fire with a Kalashnikov as they targeted an entry point to the terminal.

Recent bombings in Turkey have been linked to either Kurdish separatists or the so-called Islamic State group. 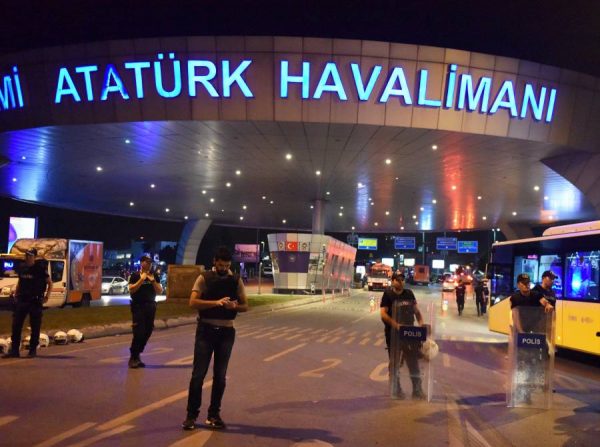 Ataturk airport was long seen as a vulnerable target from the ISIS group. There are X-ray scanners at the entry to the terminal but security checks for cars are limited.

Flights in and out of the airport were suspended after the attack. Taxis were used to rush casualties to hospital in the immediate aftermath of the attack.

The Istanbul governor Vasip Sahin gave the death toll of 28 after first reports of 10 fatalities.

“Three suicide bombers carried out an attack,” Vasip Sahin is reported to have told journalists. “Twenty-eight people have lost their lives. There are also 60 people injured.”

Charles Michel, the Prime Minister of Belgium whose capital city was targeted by bombers in March, tweeted from the EU summit in Brussels: “Our thoughts are with the victims of the attacks at Istanbul’s airport. We condemn these atrocious acts of violence.”

In December, a blast on the tarmac at a different Istanbul airport, Sabiha Gokcen, killed a cleaner. That attack was claimed by a Kurdish group, the Kurdistan Freedom Falcons (TAK).

Security concerns and a Russian boycott have hit the country’s tourism sector this year. On Monday, Turkish President Recep Tayyip Erdogan reportedly apologised for the downing of a Russian military jet on the Turkey-Syria border last year, the act which sparked the boycott.

A US state department travel warning for Turkey, originally published in March and updated on Monday, urges US citizens to “exercise heightened vigilance and caution when visiting public access areas, especially those heavily frequented by tourists.”

The attack is believed to affect the country’s tourism sector very badly.