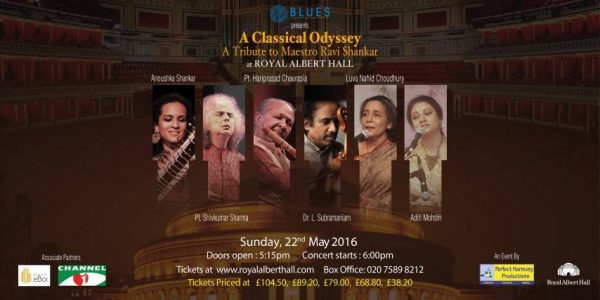 ‘A Classical Odyssey’ is a musical offering to maestro Ravi Shankar, the global phenomenon in Classical music. The tribute concert features a solo performance by his daughter the sitar doyenne Anoushka Shankar. Anoushka is credited with many awards and Grammy nominations for her extraordinary projects.

Another solo performance for the evening features the world renowned violin virtuoso, Dr L.Subramaniam. His performance will feature Carnatic classical music. He will be accompanied by noted musicians on Ghatam, Morsing and Mridangam (various Indian percussions).

In addition to the above, sonorous vocal recitals of Tagore Songs by celebrated artists Ms Luva Nahid Choudhury and Ms Aditi Mohsin from Bangladesh are other exciting features of the concert.

A major attraction of the evening, a duet featuring Pandit Shivkumar Sharma on Santoor (a melodic string instrument with Persian lineage) and Pandit Hariprasad Chaurasia on Bansuri (bamboo flute), promises to be an ethereal experience. Both are living legends and icons to music lovers the world over. They will be accompanied on Tabla and Pakhawaj (Indian drums) by noted exponents Vijay Ghate and Bhavani Shankar respectively.

The concert is presented by Blues Communications in association with Perfect Harmony Productions Ltd UK.