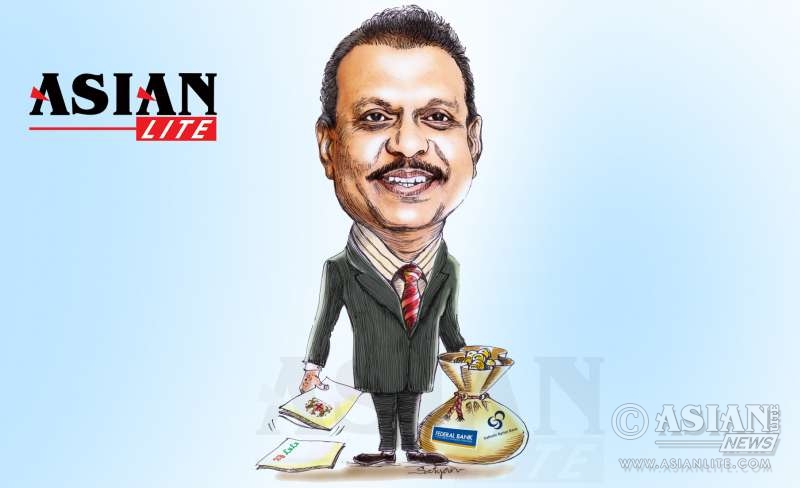 After conquering the Middle East, South East Asia and Britain, the Lulu Group, the new co-owner of East India Company is planning to expand to the United States of America….writes Kaliph Anaz

Yusuff Ali MA, the billionaire businessman and the Managing Director of the Lulu Group, said the group will begin operations in the US in the near future and the preparations are going on in full swing. The US base will be similar to the resourcing hub operating in Brazil and Britain.

The Lulu Group, which operates in 31 countries, earlier bought a 10 per cent stake in the East India Company and a 40 per cent stake in its fine foods subsidiary for around £50m in total in 2014. The company is now aiming to expand its store network in Europe, the Far East and preparing for a launch in the US.

The group has recently acquired former headquarters of Scotland Yard in London and opened a multi-million warehouse with all modern facilities in Birmingham. The Lulu Group has mustered Galliard, the UK property developer, to complete a £110 million deal to create a five-star hotel at Great Scotland Yard in the latest deal by an Indian investor to look to profit from London’s property market. The plans for the site of the Metropolitan Police’s first headquarters involves a £50m refurbishment to be completed by 2017. The hotel is targeting to attract high end customers.

Mr Yusuff Ali said British products are a favourite among his customers across the world. Tata Group, which owns Tetley Tea, and the arrival of retail giants like Emke Group will herald a new era of Indian dominance in the British market.

India government has allowed FDI in key sectors like defence, construction, civil aviation and media and eased norms for businesses such as single-brand retail and private banking and allowed the Foreign Investment Promotion Board (FIPB) to clear proposals up to Rs 5,000 crore from Rs 3,000 crore earlier.

“Indian economy was stagnated for a long time because of the delay in taking strategic decisions,” Yusuff Ali said. “Within the last 18 months, Modi and his Finance Minister Arun Jaitley are unleashing the power of Indian economy through various projects like Make in India, Digital India etc.

“The vibrant democracy with 1.3 billion  residents can tilt the fate of global brands and global economy,” Yusuff Ali, an authority on world retail market said. “The future of India is bright because India has the world’s largest youth population.”

With 356 million 10-24 year-olds, India has the world’s largest youth population despite having a smaller population than China.

Mr Modi mentioned the Lulu Group’s Scotland Yard project besides the Tata’s Jaguar take over during his historic address at British Parliament.

Mr Yusuff Ali was one among the 20 top CEOs of Indian-origin attended the meeting chaired by Modi and Cameron along with Tata Group chairman Mr Cyrus Mistry. Other attendees are Sunil Bharti Mittal, Uday Kotak, TK Kurien of Wipro, CK Birla Aditya Puri of HDFC and Dr Jyotsna Suri of Bharat Hotels.

LuLu Group is in the final stages of starting its operations in Malaysia with its first hypermarket set to open in February 2016 in the capital Kuala Lumpur.

“We plan to initially invest $300 million in rolling out 10 hypermarkets in the next two years and gradually expand to all parts of Malaysia,” said Yusuff Ali. “Today the whole world knows about Malaysia’s economic stability, investor-friendly approach, liberalised policies and world-class infrastructure and we are confident about our success here.” 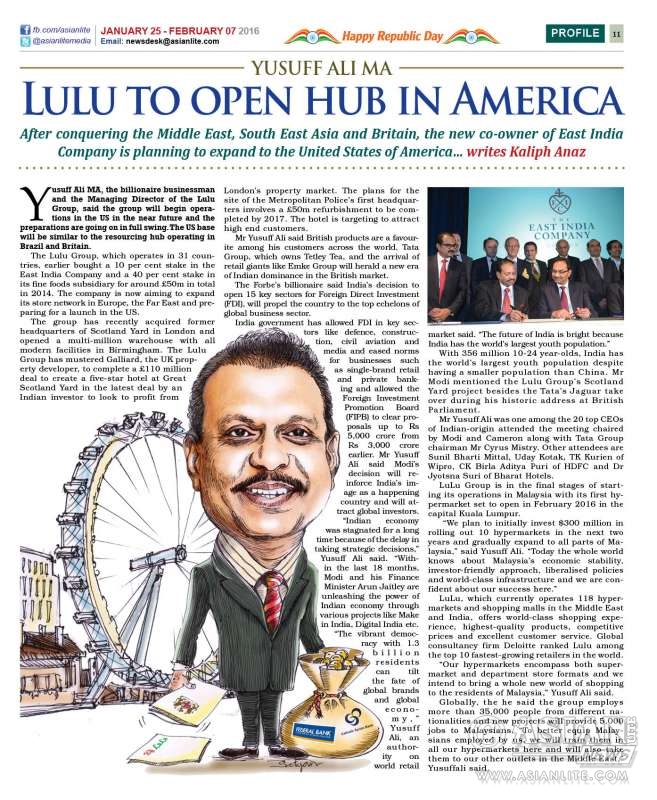 “Our hypermarkets encompass both supermarket and department store formats and we intend to bring a whole new world of shopping to the residents of Malaysia,” Yusuff Ali said.

Globally, the he said the group employs more than 35,000 people from different nationalities and new projects will provide 5,000 jobs to Malaysians. “To better equip Malaysians employed by us, we will train them in all our hypermarkets here and will also take them to our other outlets in the Middle East,” Yusuffali said.