Kolkata will take a century to recover from Mother Teresa….writes Aroup Chatterjee. Mother Teresa will be canonised on Sep 4 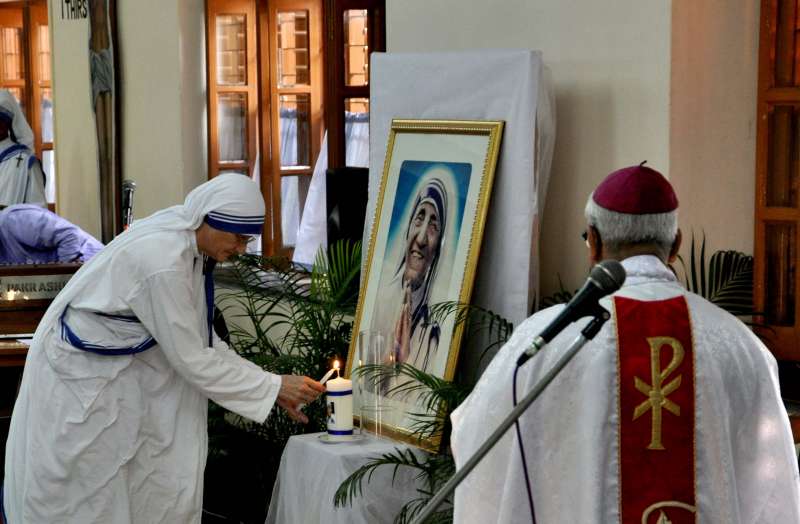 If Mother Teresa, to be canonised at the Vatican on September 4, is to be named a patron saint of anything it should be for “misinformation”. In the last 20 years of her life, truth became an unknown entity to her. The media aided and abetted her lack of integrity and in a way she cannot be blamed for believing in her own lies.

Intellect was not her strong point and, for someone like her, to be surrounded by hordes of sycophants who were telling her if she said black was white then that had to be true, it became intoxicating. The media did spread the mega-myth about her, but she herself was the source. She repeatedly told the world she went around the city 24×7 “picking up” destitute from its squalid “gutters” (she did not), that she fed up to 9,000 in her soup kitchens (she did not), she never refused a helpless child (she did as a rule), that the dying destitute in her so-called home for the dying Nirmal Hriday died a “beautiful death” (they were treated harshly and often died a miserable, painful death).

Mother Teresa was an ultimate politician who worked on behalf of the Vatican. No, she was not an “agent” as that would be conspiratorial. She did not have to do much subterfuge or skulduggery in India itself, as Indians, particularly the media, were in awe of her and connived with her.

When she said in her Nobel speech that she created 61,237 fewer children from (slum) couples abstaining from sex, no one challenged her on her bogus and fantastic figure; neither did they ask her how at the height of the Cold War abortion could be the “greatest destroyer of peace” (said a thousand times, including in her Nobel speech).

I do not blame world media as much as I blame Indian and particularly Kolkata media. Here she was, a jet-setting celebrity — although appended with the epithet “of Calcutta” — spending six to nine months in a year in Europe and the US, making strange claims about her work and about the disgusting state of the city, but never to be seen in the city’s disasters — major or minor.

Why was she not asked why she re-used needles on her residents in Nirmal Hriday (it was official policy) when she herself received the finest care in the world’s best hospitals?

Even after her death, the Indian fear of blue-bordered saris continues. On August 1, 2005, UK TV showed a child tied to a cot overnight in her orphanage — one Kolkata newspaper grudgingly reported the matter with lots of “alleged”. During her lifetime, even that would be unthinkable. She was white, she hobnobbed with President Ronald Reagan (they were closest of buddies), and oh yes, she had the Nobel — so she had to be divine.

Did no one know that she hobnobbed with the Duvaliers of Haiti whose brutality was unsurpassed (whose opponents were often cut up and fed to dogs)? No one in India wanted to know. For the Western media, she was a metaphor, a set-piece, a stratospheric certainty of image in an uncertain and changing world. Conversely, Kolkata was the opposite metaphor of absolute degradation where “foetuses are given to dogs to eat” (as remarked by her “other self” Francis Goree).

It was beyond the West’s interest, energy or remit to robustly challenge these wrong stereotypes. But did Indian journalists not know that her main bank was the Vatican Bank, a dark cavern of corruption, intrigue and murder? Before she died, it was well known that she had accepted millions from Charles Keating, the notorious American swindler, but no one in India cared.

Bengalis showed some rare guts when she was beatified through a “miracle” in 2003. Doctors, and even the then Health Minister, made statements that Monica Besra was cured by prolonged treatment, and not by an aluminium medal. Even Besra herself periodically said her cure was not a miracle. But the Vatican treated Indian opinion with the contempt it always has and proceeded with canonisation.

But what is so great about Catholic saints? People should realise a Catholic saint does not have to be saintly or nice in the secular sense, but has to be pure to Catholic dogma, especially on contraception and abortion. Jose Maria Escriva, a Fascist, is a Catholic saint; another Fascist, Cardinal Stepinac, is a “blessed”. “Saint” John Paul II actively shielded the prolific paedophile and criminal Marcial Maciel over many years. Mother Teresa also wrote a letter of support for a convicted paedophile priest Donald McGuire, asking people to overlook his “imprudence”.

If one looks around Mother Teresa’s homes in Kolkata today, one would find many of them acceptable. But one must not forget that this comes after 25 years of campaigning by me, and also persistent global criticism from Hemley Gonzalez, the American former volunteer who in 2008 was so utterly disgusted by what he saw that he founded the Stop the Missionaries of Charity movement and founded his own Responsible Charity. Moreover, in the last six months the order has spruced up a great deal, preparing for the canonisation on Sunday.

And yet, like obliging picaninnies, the Indian government is dutifully sending a delegation to the black-magic ceremony in Rome. (Hindus please note: the Pope is not allowed to wish Hindus personally even on Diwali.)

Be that as it may, my own wish would be to reclaim Kolkata/Calcutta from Teresa — to sever the automatic connection of the two names as the whole wide world sees it. Kolkata’s image under the yoke of Mother Teresa will take a century to recover. In the last 50 years, the city has lost an unimaginable amount from the loss of international business and tourism and will continue to do so. But let us at least loudly, proudly proclaim that we have nothing to do with a medieval creature of darkness — not any more.