Whether it is his trade mark blue turban or silken diplomatic suavity, the new Indian High Commissioner to the Court of St James, Navtej Sarna, has noticeably landed in London! 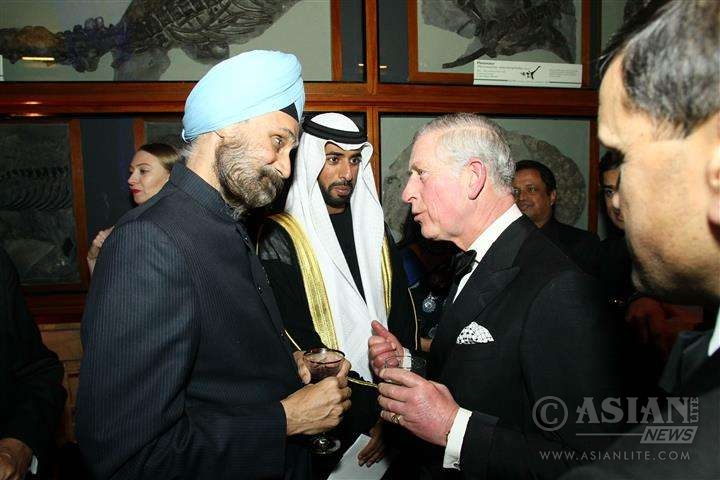 Even before he’s presented his credentials to Queen Elizabeth, the British monarch, he partook of dinner with her heir, Prince Charles, at the British Asian Trust’s annual fundraising bash. The charity, created by Charles, helps to alleviate poverty in South Asia.

Also at the gathering of the well healed at Kensington’s Natural History Museum were faces familiar to Charles – Gopi Hinduja, whose family are estimated to be the richest in the UK by The Sunday Times, Mumbai-born Priya Vandrevala, who with her investor husband Cyrus famously hosted a concert and dinner at Buckingham Palace – the central residence of the Queen – to celebrate Charles’ 65th birthday, and Pakistani financier Arif Naqvi. The evening commendably raised £900,000 (Rs9 crores) for the cause.

The tittle-tattle in the Daily Mail was Simon Cowell of X Factor fame arrived in unbuttoned shirtsleeves for a black tie event, that, too, after the future king had delivered his keynote speech, which included – one might add to loud cheers! – a description of his consort Camilla as “my darling mebooba”.

Actor and comedian Sanjeev Bhaskar compered the occasion – an amalgamation of the established and the up-and-coming. From filmmaker Gurinder Chadda, actress Myra Syal to the tall, slim and ebony, albeit a little self-conscious, Burberry model Neelam Gill in a black satin maxi with spaghetti straps and rather sexy thigh slits!!

To cap it all, Sarna hosted a maiden cocktail reception; the success of which could be gauged by many overstaying their welcome! The hospitality made the diary page of a London daily – often an indicator of a diplomat’s acceptability in London. Clearly, the first ever Sikh High Commissioner to the UK is an immediate hit!  (@C – RAY MEDIA)