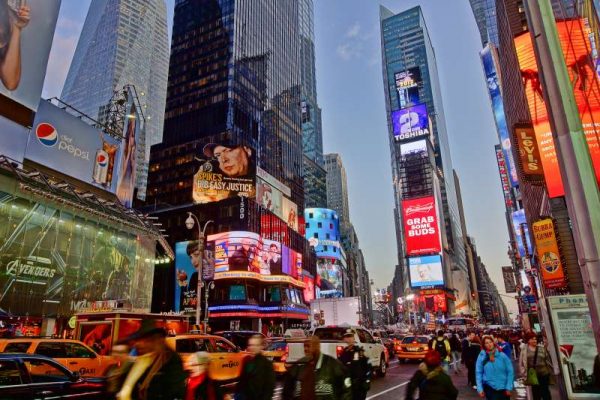 An uncommon calm is scheduled to embrace the frenetic “Crossroads of the World”, the city’s Times Square, on June 20, this year’s Summer Solstice Day here, when thousands of people practice the ancient Indian art to celebrate the International Day of Yoga.

The Times Square community event will likely be the biggest Yoga Day celebration outside India. The day-long series of seven events that run from 7 am to 8.30 p.m. will stretch over several city blocks.

The celebration organised by the Times Square Alliance brings together 30 yoga studios ranging from the Iyengar and Bikram institutions to Sonic Yoga and mang’Oh Yoga.

“Yoga unites us with the universal flow and connects us with our own personal rhythms,” Douglass Stewart, co-founder of Solstice in Times Square, said in a statement.

“As the sun climbs to its highest point and is suspended in the sky for the longest period, it provides us with a vital force that sustains all of life, giving us a focal point and uniting our purpose to achieve our highest ambitions.”

Last year over 30,000 people participated in the Times Square event.

India’s Consul General Riva Ganguly Das has brought together 17 organisations in six states to reach out to the American community with the message of yoga.

Another important celebration will be in Boston where the South Asian Arts Council is organising an observance at the historic Hall of Flags in the State House, the seat of Massachusetts state government on Beacon Hill, on June 23.

The community celebrations started off Friday with events at two schools in the New York suburb of Freeport that was organised by the Hindu Swyam Sevak.

On Saturday, it was the Queens Museum’s turn to hold the celebration in association with the Indian Business Association, in front of the city landmark Unisphere, a 37-metre stainless steel globe.

A unique feature of the community celebrations this year will be Yoga Day events at the John F. Kennedy Airport in New York and Newark Liberty Airport on June 21.

On June 19, New England International Day of Yoga will be celebrated at the Kresge Auditorium of the Massachusetts Institute of Technology (MIT) in Cambridge.

Celebrations are also planned for Columbus and Cleveland in Ohio and Hershey in Pennsylvania.

Several Indian organisations are to take the celebrations to schools in New York, New Jersey and Connecticut states.