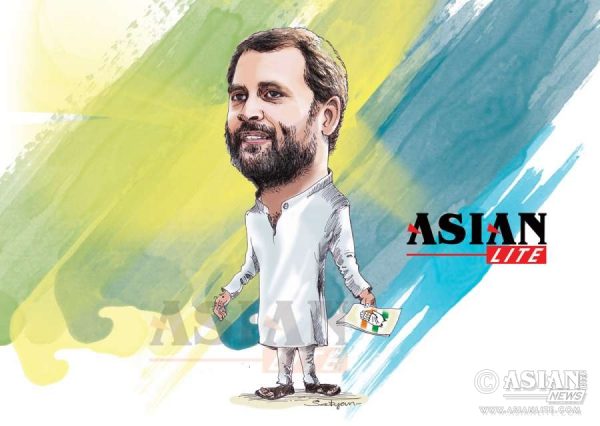 There are bigger things in life than Rahul Gandhi having his eyes closed. Maybe like Rodin’s thinker, he was thinking. Besides, there isn’t one of us who hasn’t flaked out at some time or the other in a public forum. And to be fair some of us do our collect our thoughts with our eyes closed.

I know I do and I concentrate better.

You shut out the world. There has been so much this week to shut out. Now, I am not saying Rahul is aspiring to be Socrates or Aristotle but before we nail him for casual indifference wouldn’t it be fair to just ask him if he was caught napping?

I nodded off during the Arnab ‘noise-hour’ the other night and if you can achieve that state in those conditions then you can sleep just about anywhere.

Come on people! Be kind.

This is not a ‘bash Rahul’ week and we are detracting from other major tectonic fractures in our social structure that are a lot more dangerous than Rahul’s eyes wide shut. Uppermost in my mind is the rape of a girl in Haryana by the same five creeps three years after their first assault on her. It is frustrating not to know if all five have been arrested, but no one tells you.

Some say two, some say three, where are the others? What sort of parole system do we have when rapists are given bail and then have the temerity to repeat the offence and six days later, are poncing about free as larks?

We can blame the government for sure, because most of the crap seems to be hitting the ceiling right where the BJP holds up the roof. Haryana and the repeat rape. Gujarat and the thrashing of the four Dalits for skinning a dead, foul-smelling cow. In Uttar Pradesh, we have this newly-minted BJP VP fella insulting Mayawati by saying she is worse than a sex worker, which is a bit nasty against the oldest profession, but hey, guess what? BJP again. Not quite a happy week for the BJP.

Also why are the chief ministers and other frontliners such shrinking violets that they cannot come out and face the public instead of sending their minions.

Somewhere in their minds they must be thanking their stars for Rahul’s nap. If it wasn’t for that little diversion, the media would have ridden them out all tarred and feathered. For being ugly chauvinists, racists, clumsy, casteist, pro-rape, anti-justice, slow-off-the-mark on all counts and, most infuriatingly, still incapable of biting the bullet.

Why not fling Dayashankar out of the window?

Catch the five rapists and parade these criminals.

Get the weight off the derrieres of the police in these states.

Show us the faces of the so-called cow-saviours, who handed the rod to each other in a macabre relay while the police watched the beatings for three hours.

And you are worried about Rahul Gandhi sleeping. Maybe he was just swallowing his nausea.