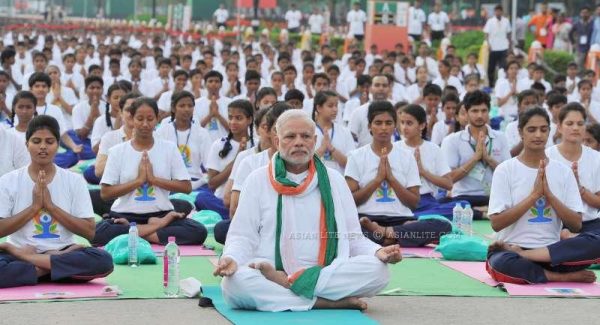 Hundreds of thousands of people across the country and abroad will bend and stretch and do some deep breathing as part of yoga exercises for the second International Yoga Day celebrations with Prime Minister Narendra Modi leading the events in Chandigarh on Tuesday.

Modi will take part in a mass yoga demonstration of the “common yoga protocol” at the spruced up Capitol Complex in Chandigarh early on Tuesday morning.

Authorities were busy giving last-minute touches to the Capitol Complex amid fears of a washout after showers lashed the city on Monday evening.

The showers notwithstanding, preparations continued in full swing and officials were busy cleaning up the venue after the rain.

“There are high chances of rain in Chandigarh and nearby areas on Tuesday too,” Surinder Paul, director of the meteorological office here, said.

A total of 30,000 participants — 10,000 each from Chandigarh, Punjab and Haryana — donning T-shirts and black or blue tracksuit lowers, will perform deep breathing and stretching exercises against the backdrop of the Capitol Complex, one of the acclaimed creations of French architect Le Corbusier.

Apart from the main event at the Capitol Complex, yoga day events will be held at 100 other locations across Chandigarh.

In the run up to Tuesday’s event, Modi released a commemorative postal stamp on Surya Namaskara in New Delhi on Monday.

President Pranab Mukherjee will kick off a yoga demonstration at Rashtrapati Bhavan on Tuesday in which around 1,000 persons will take part. The participants will include officers and staff of the President’s Secretariat, their family members, members of Delhi Police, ITBP and President’s Bodyguard as well as other residents of President’s Estate.

Patanjali Yogpeeth, which is headed by Swami Ramdev said that a mass yoga event will be held in Faridabad on Tuesday and “several world records would be set.”

Patanjali Yogpeeth spokesperson S.K. Tijarawala said over one lakh people are expected at the event in the “largest ever (such) congregation”.

He said records will also be set of simultaneous performance of yogic postures as also push ups.

BJP president Shri Amit Shah will be the chief guest at the Faridabad event.

Over 173 Indian missions across the world are also organising Yoga demonstrations to spread awareness for the International Day of Yoga. The event will also be observed by 191 of 193 members of the United Nations.

In a first, the UN was lit up for the International Yoga Day, with a huge panel showing the different yoga postures.

The lighting will be on from June 20 even as Yoga events are being undertaken in India and elsewhere.

The Embassy of India in Paris organised an event at the iconic Eiffel Tower on Sunday as part of the series of events to mark the second International Day of Yoga.

Yoga demonstrations will also be organised at several places in state capitals. Events have been planned at all district headquarters in the country in association with prominent yoga institutions.

The protocol for yoga events on Tuesday involves loosening up exercises like neck bending and body twisting.

The second section of exercises, to be done in standing posture, comprises of yoga exercises, including ‘tadasana’ or palm tree posture and ‘vriksasana’ or the tree posture.

It will be followed by the supine postures comprising ‘sethubandhasana’ or the bridge posture, ‘pavanamuktasana’ or wind releasing posture and finally ‘savasana’ or the dead body posture.

Breathing exercises like ‘kapalbhati’ and ‘pranayama’ will be performed next by dhyan or meditation and finally the ‘Shanti path’.

A theme song for the International Day of Yoga, named ‘Yog Geet’ has been released this year in addition to the Yoga Protocol of 45 minutes.