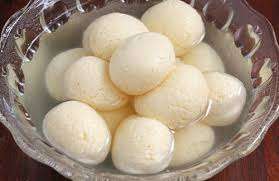 People in Odisha celebrated ‘Rasagola Dibasa’ while the state government claimed to have found evidence about the origin of the syrupy sweet in the state.

Following the sweet battle with neighbouring West Bengal over its origin, some youngsters and sweet traders observed, for the second year in succession, the day on the occasion of Lord Jagannath’s “Niladri Bije” (return to the temple after annual Rath Yatra).

During Niladri Bije, Lord Jagannath offers the sweet to appease his wife Laxmi, who was upset after Jagannath went on the nine-day Rath Yatra to his aunt’s house.

Meanwhile, the state government claimed that it had found a new evidence about the origin of Rasagola in the state, and it would apply to get the Geographical Indication (GI) tag for the sweet.

“We have collected authentic evidence about the origin of the sweet in Odisha before 1500 AD. The expert committee constituted for this has submitted the evidence to the department,” said Science and Technology Minister Pradeep Kumar Panigrahi.

The expert committee in its report said the sweet was cited in “Dandee Ramayana”, the Odia adaptation of the Valmiki Ramayana by sage poet Balarama Das, the eldest of the Panchasakhas in the 15th century.

Further, Dandee Ramayana has featured in World e-Book of 1921 published by Calcutta University.

Historians in West Bengal believe that the sweet was invented in the state in 1868 by iconic confectioner Nobin Chandra Das, whose son later founded the famous sweetmeat chain K.C. Das.