Thembalath Ramachandran aka TR grew Bristol Laboratories from a company with one person and one product in 2001, to the one which employs over 600 people across UK today. His success story is an inspiration to the new generation of British Asians…writes Rajitha Saleem

Thembalath Ramachandran has come a long way down the path of personal fulfilment since his days working as an executive director at Mumbai-based pharmaceutical giant Ipca Laboratories. Those were days that occupied him, yet the years since he formed Bristol Laboratories from a modest office in Harrow to a significant UK operation encompassing a head office in Berkhamsted, Hertfordshire and a manufacturing facility in Luton, Bedfordshire and in Peterlee, Durham County has given him great satisfaction.

“My intention of starting a business was just taking on another challenge,” he says. “It is always a challenge to establish a new company in a new country and I thrive on challenges. I was working almost 18 hours a day and was fully supported by my wife Sreedevi and children.”

He recounts with some fondness the moment, in 1997, when he arrived in the UK to establish Bristol Laboratories.

“At the start it was a very small company, with one director, Mr.P.M.Raju, who has been associated with me for all these years. We started in a small office in Harrow. From there, we initiated the registration process for our products with the MHRA. By 2001, we were able to launch some of our own products,” he says.

“From a humble beginning and a turnover of over two million pounds in 2001, we grew at a steady pace over the next few years.”

A desire for growth saw him acquire a sick manufacturing unit of Wallis Laboratories in Luton in 2004 and turn it into one of the most significant manufacturing facilities for generic products, employing over 600 people. “We have expanded, automated and created this capacity 15 times more than what it used to be. We have also converted it into a very efficient unit,” TR insists with a remarkable amount of pride.

Bristol Laboratories market more than 150 molecules and over 300 presentations in the United Kingdom. Their products are available throughout the country, in most pharmacies, as well as NHS hospitals and in the Department of Health. Focused strategic vision and leadership of Mr. T Ramachandran has led the company to being one of the fastest growing generic companies in the country. The company’s business philosophy built on ‘Quality Driven Values’ and ‘Teamwork’, inspires its people to set new benchmarks in generics.

“Our focus is on development of newer generics. We have built a state of the art analytical laboratory and employ a number of professionals with sound technical expertise. Our research and development department is geared to develop over 20 generic products in a year,” added Ramachandran.

TR as he is popularly known, said, “The first 10 years was a period of struggle, development and improvement and this has resulted in our continuous growth in the last six years,” although he describes 2004, the year he acquired the manufacturing facility, as `the toughest year.’

“We basically started our business as a company manufacturing generics. Over the years we have been able to develop and successfully launch a couple of brands Zicron and Quinoric. Recently we have successfully launched Migraitan- for Migraine headache.” 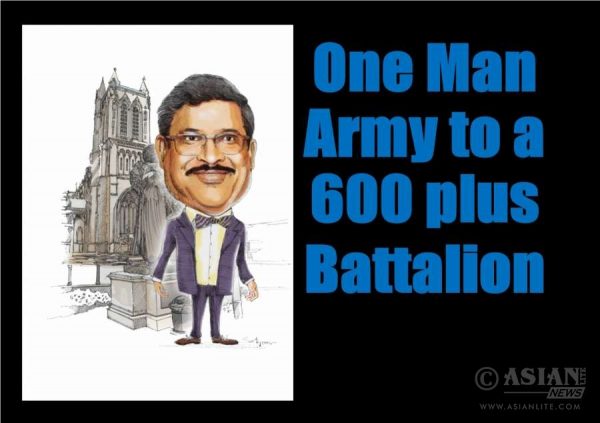 In 2009 – 2011, the company upgraded this manufacturing facility including the R&D, quality control, logistics and warehousing infrastructure. The establishment of state-of-the art pharmaceutical manufacturing unit in a tough economy demonstrates Bristol Laboratories commitment to invest and contribute to the long term goals of improving healthcare.

The next step for us was to get into the European market. In 2012 We have established a subsidiary in Spain, Brill Pharma. Today it employs close to 100 people. This company markets speciality products, as brands in ophthalmology segment currently. We intend to introduce products in other segments shortly ”.

In 2013 we acquired a company Axcount Generika –in Frankfurt Germany. Today the company is on a strong growth track, due to its synergies with our UK manufacturing capabilities.

In 2013 we have established a subsidiary in India – Brill Pharma for support services in regulatory and sourcing. Today the company is expanding to set up an R&D infrastructure to support Bristol Laboratories in developing newer products.

Before he came to UK, Ramachandran was heading a very large pharmaceutical company in India. The three decades of experience in managing all activities including production and quality management with a focus on international regulated markets has given him the confidence to manage any situation.

TR is an advocate of drugs patents but concedes that the system has its disadvantages, such as making newer products expensive to patients in poorer countries.

The UK generics industry, according to Ramachandran, “is one of the toughest generic markets, probably in the world. There’s a lot of diversity.  The UK is probably one of the first European countries to recognise the impact of generic products in bringing down the cost of medication in healthcare and insist on the generic prescriptions. This is now gradually being followed by many other European countries. In the UK, there are a number of manufacturers and strong supply chains. So, it is not easy to get into the market.

“One of the major Challenges here is the cost of labour,” he suggests. “It is very high compared to any other country, which makes your product very expensive. It is important for the government to support the industry in any way it can because nobody would like to run a factory to make a loss.

A man of challenges, there is still plenty to occupy TR, particularly the struggle to persuade the government to throw more support behind the pharmaceutical industry.

“I’m a visionary, not an operations guy,” says TR, “so I must have a dedicated and expert team to deliver my vision.” His current role at Bristol Labs, he reveals, involves very little operational routine. “Practically, I don’t get involved in routine. I just oversee things and intervene where required. Otherwise, my job is to provide direction for the growth of the company. Today Bristol Laboratories is managed by a team of well qualified professionals.”

In 2015, Bristol Laboratories won the Innovation in Generics –Award and the Hertfordshire Large Business of the Year award.

He has ambitious plans for Bristol Laboratories. In 2014, the company acquired another manufacturing facility plant in Peterlee, Durham County. With substantial investment over the last one year, the manufacturing facility has been upgraded and recently approved by the regulatory Authorities for commencing production. This plant is expected to boost production capabilities of the company, and has already created over 200 jobs in the area.

Future plans include expansion of the company in to the rest of the world including Africa, Middle East and finally the USA.

Mr. Ramachandran is supported by his wife Sreedevi and three daughters, Priya, Priti and Premita. Two of his daughters are in the business with him, Priti, a Qualified Pharmacist, is the Director- Quality & Regulatory Affairs and looks after the technical operations of the company. Premita has taken up the key portfolio in the development of the company’s Over the Counter (OTC) business.