The married father-of-two paid for the men to visit him one evening last month at a flat he owns in London, the newspaper claimed.

Mr Vaz, 59, who is chairman of the Home Affairs Select Committee which monitors crime and drugs policy, told the paper he was referring the claims to his solicitor and would be seeking advice.

“I am genuinely sorry for the hurt and distress that has been caused by my actions in particular to my wife and children,” Vaz was quoted as saying in a statement. “I will be informing the Committee on Tuesday of my intention to stand aside from chairing the sessions of the Committee with immediate effect.”

The paper said Mr Vaz tried to hide his real identity from two male escorts by telling them he was a washing machine salesman named Jim. He blurted out the pseudonym as he was about to engage in sexual activity with two Eastern European male escorts.

The paper said that Mr Vaz has stepped aside as committee chairman. Nicknamed Vaz-eline, Mr Vaz is an accomplished networker, who he once topped a list of Britain’s most influential Asians, but his 29-year Commons career has not been without controversy. He was accused of helping Hindujas to get British passports.

“I have referred these allegations to my solicitor Mark Stephens, of Howard Kennedy, who will consider them carefully and advise me on what is published,” Vaz said in a statement.

A Labour Party spokesman said: “Keith Vaz has issued a statement on this matter. As with all departmental select committees, Keith was elected to the chair of the Home Affairs Select Committee by the House of Commons, and his position is a matter for him and the House”. 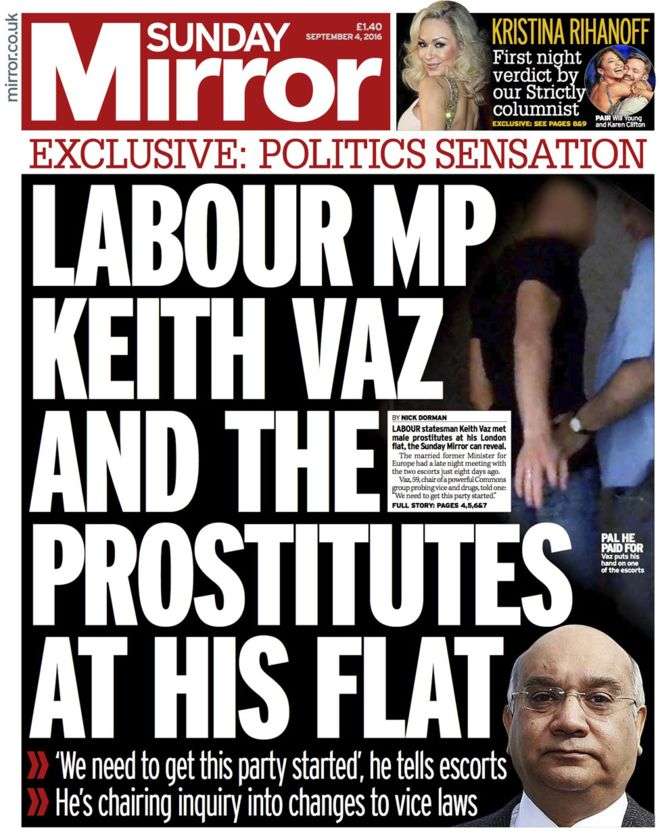 According to the Sunday Mirror, Mr Vaz’s meeting with two male escorts included a discussion about using the party drug Poppers.

The MP for Leicester East had opposed government attempts to criminalise the drug. Ministers later announced they would remain within the law.

His committee is also currently overseeing a review of the UK’s prostitution laws.

Vaz was Bborn in 1956 to Goan-origin Indian parents. He arrived in England in 1965. He went to Cambridge University before qualifying as a solicitor. His father committed suicide when he was young.

Mr Vaz moved into politics, standing for Labour in Leicester East in 1987,and becoming the party’s youngest MP. He rose to Parliamentary Private Secretary to the Attorney General and has headed the all-party Commons Select Committee for the past nine years.

His highest office came in 1999 when he was made Europe Minister.