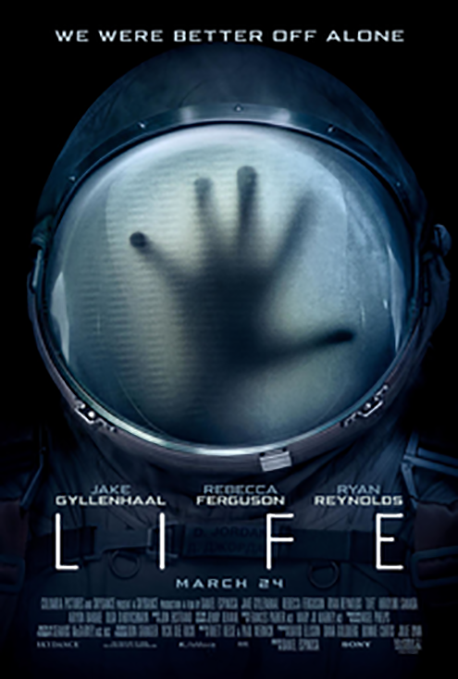 A fantasy sci-fiction, “Life”, is a simple, engaging outer-space horror thriller that occasionally shows sparks of brilliance in an otherwise ordinary fare.

In many ways it is similar to the 1979 released “Alien”. Director Daniel Espinosa’s film is the tale of a parasite-predator, who is brought to life in a spaceship. How the team of astronauts and scientists are forced to fight for their lives against the evolving alien life form wreaking havoc on their spaceship, forms the crux of the tale.

It is while analysing a sample of the soil from Mars, brought by an automated spacecraft that the group discover a single cell micro-organism unlike any they’ve encountered before. After they feed it with oxygen and glucose, they notice that the creature begins to respond. With each passing day it grows at an alarming rate in its petri dish from a little two armed jellyfish to a multi tentacle cross of a starfish and an octopus with “all muscle, all brain and all eye”.

The creature is enthusiastically named Calvin after a school in the US. What starts off as an eager experiment, gradually turns out to be a spectacularly gory, stomach-churning as well as jaw-dropping thriller, especially after it grabs the little spatula with surprising strength and hostility which Derry prods it with.

Just like in life, you never know what to expect, seeing the creature grow and survive, makes the film a memorable one. This is more so because the script focuses solely on Calvin while the rest of the cast have their moments of on-screen glory.

Every actor delivers a respectable and charismatic performance but it is Ariyon Bakare who with a particularly nuanced performance shines as the paraplegic scientist who revels in the anti-gravity lifestyle aboard the ISS. The rest of them are near stock characters.

The screenplay by Rhett Reese and Paul Wenick is intensely taut and suspenseful. It is thrilling when it is smart but it is even more exciting when the characters are dumb and emphasise on protocol, thereby falling into the trap of genre cliches. The third act gets a bit monotonous, also the climax seems like a rushed job. Nevertheless, the unexpected end promises a sequel which could be more exciting than this film.

On the production front, the film is astutely handled and apart from scenes that remind you of “Alien”, there are chunks that remind you of Alfonso Cuaron’s sci-fi drama “Gravity”. The cinematography by Seamus McGarvey meshes seamlessly with the stellar visual effects that are accompanied by the dramatic score from Jon Ekstrand. These are skilfully layered by Mary Jo Markey’s razor sharp edits.

The film is interesting as it offers some striking and genuinely terrifying moments.