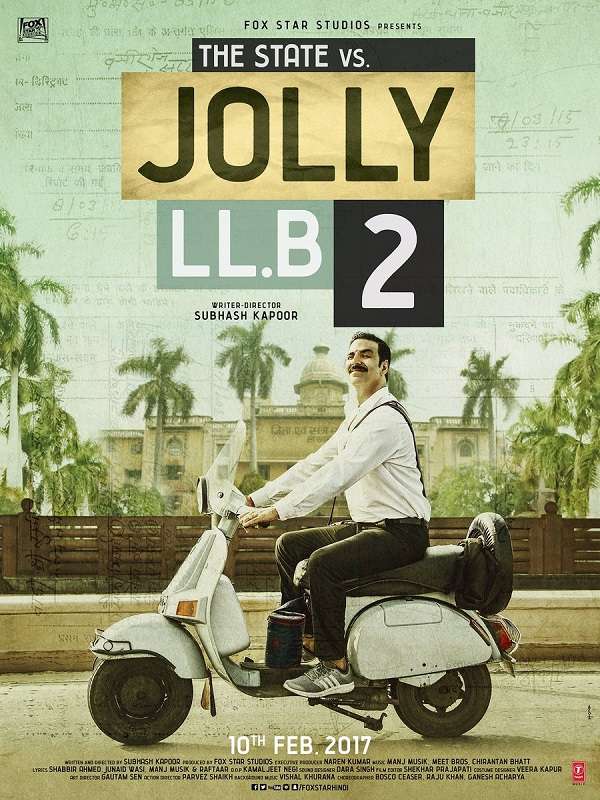 Don’t get me wrong. I am a big Jolly fan. Whether played by Arshad Warsi or Akshay Kumar the small-town lawyer’s socio-political awakening is heart-warming, to say the least. While “Jolly LLB 2” is suffused with a swarming all-pervasive social conscience that ribs our guilt-ridden middle class values and elbows our cynicism and slothfulness out of our range of activity, it suffers from a sense of overweening ambition.

Everything here is much larger than “Jolly LLB”, the 2013 sleeper hit about a lazy lawyer played with judicious jocosity by Arshad Warsi who takes on cause-celebre that turns him into a responsible citizen. Arshad’s Jolly made us cheer for his growth into conscientiousness.

Again this Writer-Director Subhash Kapoor has his heart and conscience in the right place. And Akshay Kumar’s sincerity shines through many of the film’s clumsy episodes (like the one where he is shot at and saved by his wife). The first-half builds up Akshay Kumar’s Jagdishwar Mishra URF Jolly’s lackadaisical attitude to his profession with a sure-handedness that keeps the bustling uncertainties of Lucknow moving smoothly.

A traffic jam sets in mid-way when the proceedings move into a dingy overcrowded courtroom where a big political case of an encounter must be argued out to the bitter end leaving everyone including judge, lawyers, witnesses and of course us the audience thoroughly exhausted and a tad disappointed.

The melodramatic court proceedings include the judge and lawyer doing a dharna in the middle of the session. This is not contempt. It is something else. Something far more wearying.

Also — and this point must be noted carefully, Your Honour — Akshay Kumar lets down the courtroom drama in the second-half. While he is brilliant in putting forward a case for his character’s ambitious downfall in the initial passages of the well-written if slightly over-cluttered screenplay, he is inadequate in his moral righteousness and out-performed by practically the entire cast in the courtroom.

Indeed the most gripping sliver of screenplay in this admirable though uneven morality tale of justice delayed though not denied, involves a pregnant widow Hina played by Saiyani Gupta whose husband is killed by cops in a fake encounter. Gupta brings a sense of unmitigated anxiety and grief to her part. She feels for her character. She is the voice of our collective conscience.

This brings us to the motley crew of majestic performances. Barring Huma Qureshi who is disastrously awful as Akshay Kumar’s drinking designer-wearing wife, every actor gives his or her best shot to the film. Saurabh Shukla who was an absolute scene-stealer in the first Jolly film, remarkably reboots his part as the huffing and puffing judge whose indifferent attitude in the court hides a steely determination. Shukla’s Judge has a life outside the courtroom. He loves Bollywood cinema, adores Alia Bhatt and insists he will dance to Alia’s Gulabo at his daughter’s wedding.

Can we ever dislike this man?

Annu Kapoor as the posh lawyer fighting against Akshay Kumar is delightfully strong in projecting arrogant power, as is the ever-reliable Kumud Mishra as a corrupt killer-cop. Rajiv Gupta as Akshay Kumar’s assistant compels you to keep looking at him every time he is in the corner of a frame looking nervous, fidgety or plain confused.

As for Huma Qureshi, did she walk on to the wrong set? Which movie is she supposed to be in?

While I marvelled at the grand gallery of performing maestros who imbue an honourable heft to the lopsided courtroom drama I missed the antidote to ennui that is bound to set into any courtroom proceedings that wants to prod our sense of propriety awake with homilies and cynicism harnessed into a broad-based concluding moral sermon from Judge Saurav Shukla on how over-worked our courts are.

Amen to that. As for the film’s big message on Kashmir and militancy I felt Jolly had taken on more than he could handle. Blessedly I didn’t feel the same about the film’s director. Subhash Kapoor pulls off an acerbic and arresting film on the loopholes in our legal system with an inner strength of conviction that carries us through some plodding passages of legalese.

Akshay Kumar must be applauded for selecting films that go beyond entertainment without losing their entertainment value. There are sequences here, such as the one where Hina confronts the errant Jolly in front of his wife and father, and the sequence where Jolly’s hostile mentor comes to his rescue, which are evidence of tremendous writing skill.

If only “Jolly LLB 2” didn’t fumble at crucial plot points. Awkwardness sits on the proceedings.