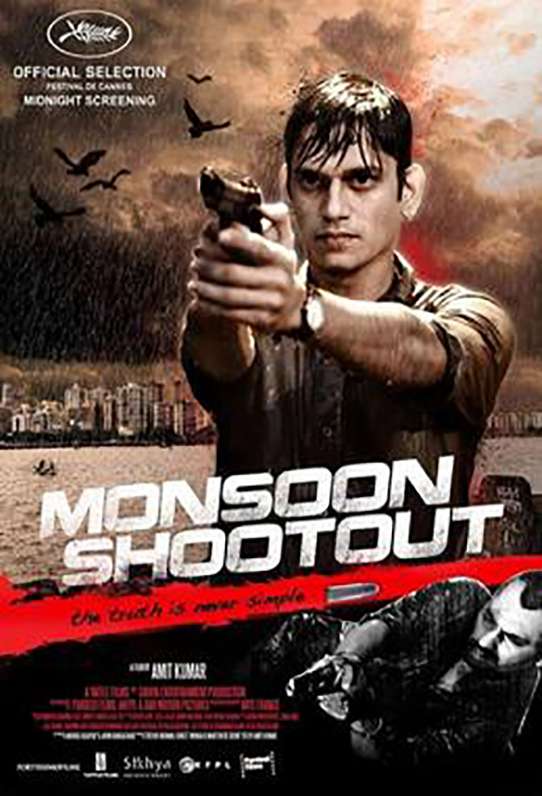 Rain-splashed bloodied puddles of questioning, probing, searching emotional and physical violence… “Monsoon Shootout” is a curious case of a potentially routine cops-and-killer sanguinary saga given a certain fresh twist of ambivalence by writing skills that know their “Dirty Harry” as closely as they know “Ardh Satya”.

There is a ‘tadka’ of circumstantial ambiguity, a twist of fate, if you will, whereby a rookie policeman’s ‘rookie-rookie si zindagi’ gets more unscheduled excitement on his first assignment than he had bargained for.

A serial killer is on the prowl. And really, in how many ways can Nawazuddin be cast as the psychotic outcast? It was a hammer in hand in “Raman Raghav”, it’s an axe here. The slayings are staged stylishly in the slippery monsoon of Mumbai when it’s easy for the elusive to give the pursuant the slip.

This is exactly what the narrative does on us. Like Nawaz’s Shiva, it repeatedly gives us the slip, leaving us with unanswered questions just when the policeman Adi (Vijay Varma, impressively callow and intense) corners the killer at gunpoint. Repeatedly, and with incessant pounding at the plot’s epicenter, the narrative takes on a what-if tangent, creating a cat-and-mouse game of its own between the camera and the audience.

It is an impressive performance, staged to seduce and please us, not always hitting bull’s eye but never losing sight of its target. There are energetic sexual encounters, involving a migrant sex worker (Sreejita De) that convey the desperation of a city on the edge, and a populace on the prowl.

“Monsoon Shootout” succeeds in gripping us by our collective jowls in spite of a certain staleness in the plot, and a stiffness in the joints of the narrative. The camera manned by Rajiv Ravi prowls through Mumbai’s crowded monsoonal mayhem with emphatic energy.

The first killing is staged with ‘festive’ favour during the Ganpati visarjan. And by ‘festive’, I don’t mean just the religious observance but also international film festivals where such films make a mark before winding down their journey to the banks of River Ganga.

“Monsoon Shootout” deserves a shout-out for its authentic view of the moral ambivalence that a law enforcer must face during an ‘encounter’. The plot weaves into tactile, tense but organically self-destructive situations of doom and decay where the voice of the conscience is drowned in the din of decay of deprivation.

Some of the moral dilemma, specially those involving the criminal’s young teenaged son (interesting juvenile newcomer Farhan Mohammad Hanif Shaikh) are disturbing to the extreme. Director Amit Kumar doesn’t hesitate from making hard choices on behalf of his characters. Consequently, this dark blood-dimmed film leaves us with a hollow feeling in our stomachs.

Life sucks. And Monsoon Shootout doesn’t do anything to ease the pain.