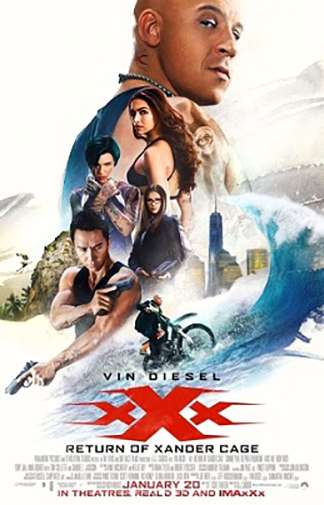 When a deadly weapon known as the Pandora’s Box is stolen, and with the villain’s modus operandi of dropping satellites on random locations, the CIA have no alternative but to coax an ex-government operative Xander Cage (Vin Diesel) to return from his self-imposed exile and help them save the world from “a global power shift.”

Xander Cage ventures out with a fresh team of hand-picked lieutenants who possess their own unique set of skills to fight the deadly enemy Xiang and his men. This forms the crux of the narrative.

The plot is wafer thin and convoluted. Packed with numerous characters and with a narrative that stretches over various locales, this film, just like its prequels, definitely evokes mixed reactions. It is a bland, run-of-the mill action thriller for those uninitiated into the series and an average-yet-exciting action fare for others.

Unfortunately, what makes the narration tedious is the talk heavy exposition and continuous over-the-top, well choreographed, breakneck paced action sequences that are gummed up with snappy edits, from start to finish. They numb your senses forcing you to even snatch forty winks.

Visually, the film is exciting. Cinematographer Russell Carpenter has astutely captured the action and the emotions with equal fervour. His live action frames seamlessly merge with the computer generated images and the 3D effects elevate the viewing experience.

On the performance front, emoting has never been a strong point for action heroes, as they deliver strong lines stoically and the ladies too are no better. But in this film, every character has its moment of on screen glory and they shine earnestly. Vin Diesel is charming as usual, and impressive among the lot are Ruby Rose as Adele, Donnie Yen as the antagonist Xiang and Deepika Padukone as Serena.

In an action-packed avatar, Deepika marks her debut in Hollywood. She is striking as well as imposing, but her weak voice tilts the balance as it does not suit the character she portrays.

Overall, the film is too loud and noisy.