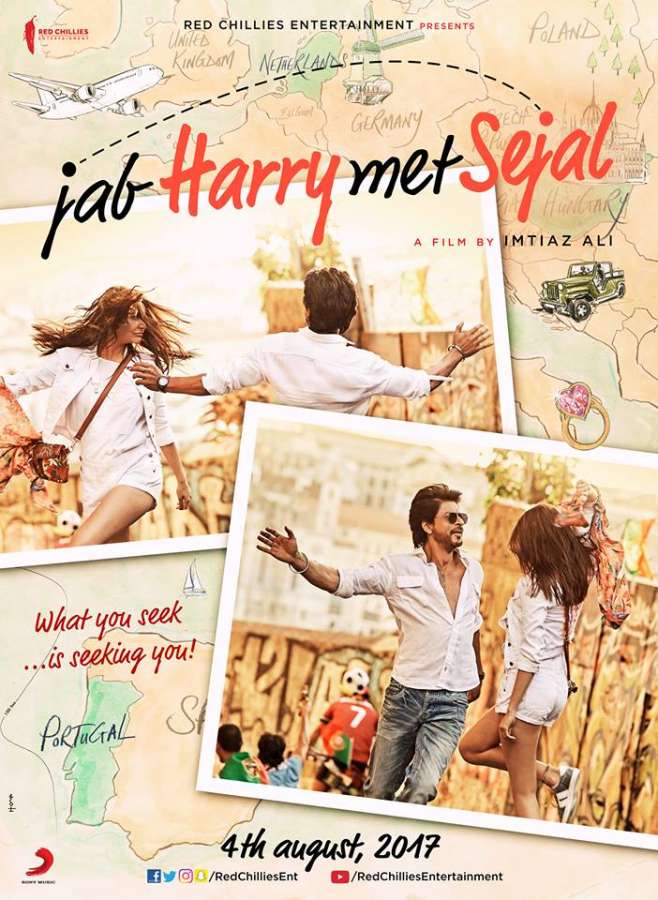 Imtiaz Ali’s knack of telling love stories, his affinity for travel and his penchant for adding a touch of Punjab to his films is reminiscent of the late filmmaker Yash Chopra, says superstar Shah Rukh Khan, who has worked with the “Jab We Met” director for the first time in “Jab Harry Met Sejal”…..reports Asian Lite News

The upcoming romantic drama, which will release on August 4, will see Shah Rukh with his “Rab Ne Bana Di Jodi” and “Jab Tak Hai Jaan” heroine Anushka Sharma. The film has been widely shot in Prague, Amsterdam, Lisbon and Budapest.

“The film travels a lot… But it is not on travel. It’s about a tourist guide, but it’s a love story… Two people meet somehow, and somewhere down the line as they are moving around, they kind of fall in love,” Shah Rukh said, giving an insight into what the movie is about.

“It was really nice because of two things, one — Imtiaz knows Europe very well. So, we have shot the film in Budapest, Amsterdam, Prague and then Punjab… In a certain way, he reminds me of Mr. Yash Chopra because he writes love stories, which travel all over India too and have a Punjab taste. His writing is fantastic,” the Bollywood Badshah said over phone from Mumbai.

Additionally, the 51-year-old actor found shooting for the film very easy as he finds Imtiaz as “a very gentle person”.

“I guess that part shows in the film,” he added.

The film’s title was being speculated on for a long time in the Bollywood circuit, until it was finally revealed on Thursday night. To many, it’s a throwback to the 1989 film “When Harry Met Sally”, but Shah Rukh says the resemblance ends there.

“It is a throwback to that. The film is not like that at all. ‘When Harry Met Sally’ is perhaps one of the most revered love-stories… But this (‘Jab Harry Met Sejal’) is an unabashed love story.

“It is a happy film as the poster suggests… And the character’s names are Harinder ‘Harry’ Singh and Sejal. It is kind of the Punjabi, Gujarati combination,” he said.

Shah Rukh, who is also presenting the film, has just averted a box office clash with Akshay Kumar’s “Toilet: Ek Prem Katha” by shifting the release date to August 4 from August 11. He feels it’s best to avoid clashes in Bollywood as far as possible.

“I think whenever you can, it’s nicer for both films. If you can’t, then you have to release on the same date because when you are looking for alternate dates so that two films don’t come on the same day, you request and talk to each other.

“And mostly what we do on the big ticket films is that since our films are expensive and big, my logic has always been that if it (date change) can be done, it’s nice.”

A successful film producer who owns the Red Chillies Entertainment banner, the star added: “Our films are also capacity films…I think they have the capacity to take on 4,000 screens and fill them up.

“If we come with another film, unfortunately we don’t have the capacity to fill in… So we are running at half capacity… We haven’t been able to exploit what our market gives us.”

Shah Rukh is confident “Jab Harry Met Sejal” will have a long run and hopes the long weekend courtesy Raksha Bandhan on August 7 (Monday) will help.

“I think we will be able to garner some advantage of the holiday of August 15 and I think our film has that scope, added the “Fan” actor.