‘The Ministry of Utmost Happiness’ is abundant with allegorical references, metaphors and similies that are Roy’s forte as concurred by NandiniNair in the magazine Open. The allusion to our contemporary habitation as graveyards, the demotion or elevation of the modern human to a person lacking a definitive gender, the infant who survived the highest form of exploitation and threat to be named “Udaya” or sunrise, all enhance the richness of the novel….Book review by Suditi Jindal on ‘The Ministry of Utmost Happiness’ written by Booker Prize winner Arundhati Roy 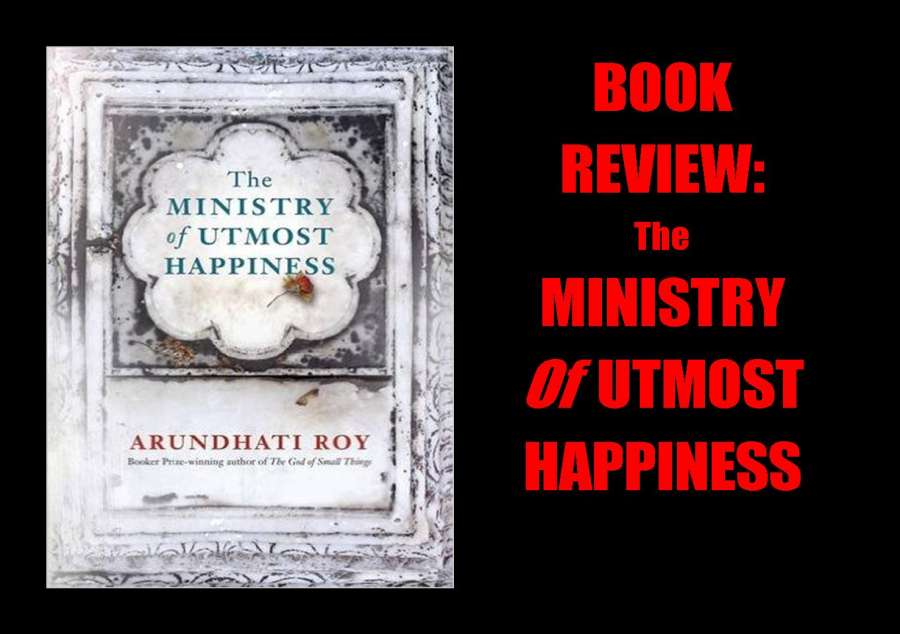 “There was hope yet for the Evil Weevil World.”

Arundhati Roy’s winning the Booker Prize in 1997, was for me, a divine message and testimony to the rising prowess of women in Indian society. The novice who upset the stalwarts in a surprise victory,birthed within me like many other women writers in India, an undaunted thought to consider writing as a profession.

As a reader and a student of creative writing, I have waited for many years, two decades to be exact, to welcome Roy’s second outing as a fiction writer. I have been tested and my threshold of patience has been expanded by a wide margin in the interim. Although Roy has penned alone or in collaboration, eight non-fiction essays in these twenty years, as I am informed by the first page of ‘The Ministry of Utmost Happiness’, they have not sated my desire for Roy’s prose. Honestly, I have not even read them, as political essays frustrate the reader and the writer within me who yearns to be taken on a flight of imagination by a skillful story-teller like Roy.

In the expansive and seemingly unending duration while my champion of unconventional writing celebrated for throwing caution at the winds and apathy at the critics, made up her mind to author a fictional narrative, I sampled the offerings of many new writers. It was only in the perusal of ‘The Vegetarian’ by Han Kang that I found a similarity of partial proportions.

Coincidently, Han Kang too became the unexpected winner of the Man Booker International prize in 2016 with her first aforementioned novel that was translated from the Korean by Deborah Smith. I was persuaded to read her second translation ‘Human Acts’ as well. In fact in an interview to The White Review, Kang asserts that her two novels should be read as a pair. I was reminded of this statement when I read the titles of chapters in Roy’s ‘The Ministry of Utmost Happiness’.

The first chapter is, ‘Where Do Old Birds Go to Die?’, a question asked by Sophie Mol, the seeker of small wisdoms, in ‘The God of Small Things’. Hence, I wondered if Roy wants us to read both her novels as a corollary to each other. But that is not the case. The novels are very different from each other, as is the writer who has written them. The change in Roy’s disposition as a thinker manifests itself in her second novel. This is much to my disappointment because I wished to partake not a quick panoramic view of India’s political history from the late 1980s to present-day, but a slice of the sumptuous creativity of this author who tells a story “as though it’s the only one”. Even in recounting the course of political flow many events like the Mandal Commission and the nation-wide gruesome agitation against it, and the Kargil war, have been overlooked or omitted by Roy.

The plot is very much present in the narrative but is burdened with too many characters which Jerry Pinto asserts in Live Mint to having counted to fifty in number. Anjum or Aftab, S. Tilottama or Tilo, Saddam Hussain, Musa or Commander Gulrez, Naga, BiplapDasgupta or Garson Hobart, and all Roy’s own characters are intriguing and interesting.

However in an attempt to write from “everybody’s” or “everything’s” perspective not enough space or attention could be given to them. S. Tillotama does appear as “Roy alter-ego” as also stated by Sunil Menon in Outlook India, reminding me once again of Rahel from ‘The God of Small Things’.Is it that the ordinary women in India are spared the trials faced by these characters?

As a woman living in contemporary Indian society I muse about the numerous ‘Nirbhayas’ who are exploited, abused, raped and tortured every day and everywhere in India, their caste, class, colour, region, revolutionary status, age, and other classifications notwithstanding. Aftab’s transformation into Anjum and her life after it, also come across as easy and unreal when I compare them with the documentaries on eunuchs in India, my reserved interactions with hijras at ceremonies during weddings or births, or Dalrymple’s eunuchs from ‘ City of Djinns’.

Han Kang too has a host of characters in her political fiction ‘Human Acts’ that talks about the Gwangju uprising in South Korea. However, unlike Roy, all Kang’s characters are her own creation that talk about a single event – the uprising. Hence, as an outsider when I read the novel I was able to develop some understanding of the event in particular and the political environment in South Korea in general. I feel this kind of  grasp of the actual situation in Kashmir cannot be developed by outsiders after reading ‘The Ministry of Utmost Happiness’, the thought has been voiced by Alan Taylor in his review of the book in The Herald when he says that India still remains “an unexplainable muddle”.

Roy has experimented with the structure of the novel and this has provided courage and design to writers like me, to indulge in an unconventional thought-process while penning a story. The first chapter of the book is wound up in less than four pages, appearing almost as a prologue, and there is a separate prologue as well. There are many such small parts in the book like the fifth and the sixth chapter.

The second chapter like a few others (eighth and ninth), extends into unusually numerous pages. This lends to the book the quality of verbatim expression of the writer’s thoughts. An effect that is heightened by the reverse flow of most of the anecdotes in the novel. I was visited by a strong sense of déjà vu while reading ‘The Ministry of Utmost Happiness’, a feeling that persistently followed me as I perused my way through ‘The God of Small Things’. This style holds the reader in a vice-like grip providing no respite in occasional mindless reading, as then one is certain to have missed a vital or vivid detail.

The image of “a cloud of ballons” that floats out when a cupboard is opened in Tilo’s room is both captivating and intriguing(207). The puzzle is solved a few pages later when I am told that Tilo had locked the balloons that were in the room from Miss Jebeen’s birthday and baptism ceremony(300). Picturesque imagery of human emotions and relations shines brightly in the part of the story that occurs in Kashmir. The cinemascopic quality of these passages took me back to Mani Ratnam’s ‘Roja’ and SoojitSircar’s ‘Yahan’. This small portion is for me, the soul of the story, but is also stifled at times by passages similar to news reportage.

Roy has retained her playfulness with the language in her second novel as well. The presence of “blindgreen” and “slygreen” type of newly coined words in ‘The Ministry of Utmost Happiness’ finds resonance in “dustgreen” and  “greygreen” type of words in ‘The God of Small Things’. The peculiar vocabulary of the twins like “dreaming people”, in Roy’s first novel finds a resemblance in the typical words like “cylinder” for surrender and “milton” for militant, used by some characters.

The digression from tradition is expressed further in “The Ministry of Utmost Happiness” when the narration changes from third person to the first person. It reminded me once again of ‘The Vegetarian’ where there are three narrators in the three parts of the novella relating the story of the protagonist who rarely speaks. Roy’s confidence and dexterity in moulding the language to suit her purpose, beautifully demolishes restrictive norms, thereby opening new portals for literary composition for writers seeking fresh ideas and forms.

‘The Ministry of Utmost Happiness’ is abundant with allegorical references, metaphors and similies that are Roy’s forte as concurred by NandiniNair in the magazine Open. The allusion to our contemporary habitation as graveyards, the demotion or elevation of the modern human to a person lacking a definitive gender, the infant who survived the highest form of exploitation and threat to be named “Udaya” or sunrise, all enhance the richness of the novel.

My only lament is that Roy should have let the activist take a back-seat in this composition and let the writer decide the form and content of the ‘The Ministry of Utmost Happiness’. The political thinker owns the territory of non-fiction essays, the sensitive writer should have been allowed the unrestricted proprietorship of the domain of fiction. I fervently hope that Arundhati Roy does not make me wait another twenty years to read her next fiction novel, although she says in her interview to The Guardian that “fiction takes its time”.