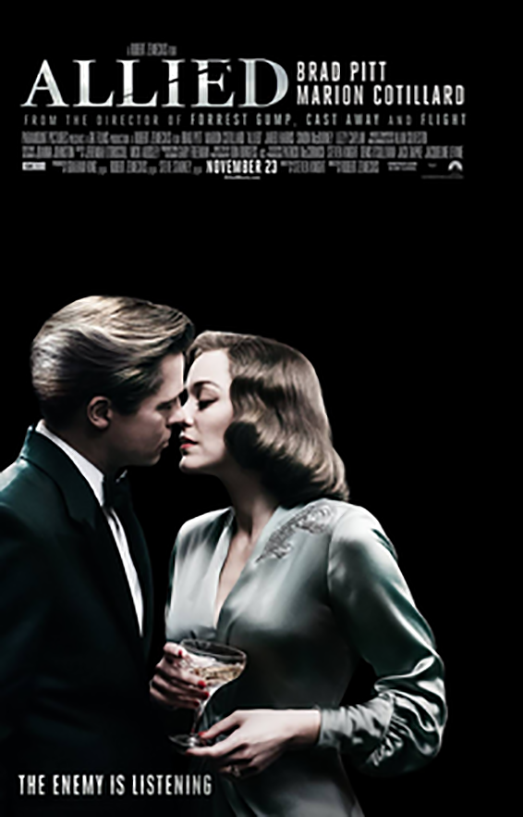 Film: “Allied”; Director: Robert Zemeckis; Cast: Brad Pitt, Marion Cotillard, Jared Harris, Simon McBurney, Lizzy Caplan, Daniel Betts, Matthew Goode, Camille Cottin, August Diehl and Thierry Fremont; Rating: ***
Have you ever read an interesting novel with some pages or chapters missing or torn away? How does it feel? Especially, with abruptly edited scenes and a strange slackness to the cuts?

That is exactly what you experience while watching “Allied”.

Not sure if it is the making of the Indian Central Board of Film Certification or the makers — the result is obviously a killjoy.

Nevertheless, “Allied” is a curiously entertaining, old fashioned, romantic thriller in the backdrop of World War II. Max Vatan is a Canadian airman working for British intelligence who is parachuted into Morocco in 1942. Marianne Beausejour is a French resistance fighter.

Posing as a faux husband and wife they meet in Casablanca to form a formidable assassination team.

Along the way, the imitation of love leads to love itself and binds them. They then share an idyllic domestic life in an air-blitz London, until questions arise concerning Marianne’s true identity and allegiance, which leads to Max engaging in some incredible, cross channel flights to prove his wife’s innocence.

The plot moves at a rapid pace in a one dimensional path that discourages any reflection. It builds on the romance in their relationship but does not offer anything exceptional, as most of the romantic scenes consist of cold routine, spy talk which only show how little emotion they can reveal. Also, given their dynamics, it is the absurd aspect of the characterisation, that takes away the credibility of the resolution.

Brad Pitt as Max and Marion Cotillard as Marianne, make a stylish, gallant and passionate couple. Together, they make an ideal pair whether they are confined in a nouveau desert eroticism, by being cocooned together in a vintage car enveloped in a sandstorm, or in marital bliss in London. Pitt is debonair in the early scenes and is convincingly anguished later, when tormented by the idea of betrayal.

Similarly, Marian Cotillard is marvellous. She is convincing, as she keeps “her emotions right”. She brings depth to her characterisation that we become as enraptured with her as Max is, even though we are just as confused as he is, in regard to her character and intentions.

On the production front, production designer Gary Freeman along with costume designer Joanna Johnston, replicate the era to perfection and this is precisely captured by cinematographer Don Burgess’s lens. The live action shots seamlessly mesh with the computer generated images. Prominent among such visuals, in the third act when a Nazi plane which is shot mid-air and seen through the window crashes in the back yard, creates a jaw-dropping suspense. This experience is elevated by composer Alan Silvestri’s meaningful scores.

Overall, “Allied” is a well made, jazzed up film that won’t be remembered as a classic.