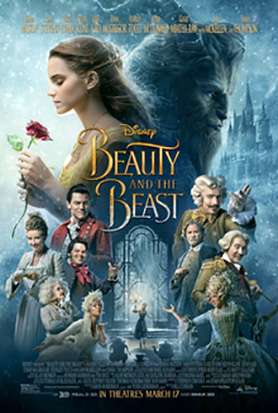 For those unaware of the story’s origin, “Beauty and the Beast” was first written as ‘Belle et la Bete’ by French novelist Jeanne-Marie Leprince de Beaumont in 1756. There have been many variants of the original in literature, television, stage and films, ever since. The last to hit the theatre was director Christopher Gan’s version which was released in 2014.

This one from the Disney stable, is a remake of its 1991 released, animated film of the same name. So while the film closely tracks the earlier version’s plot, story beats and revamps all the old songs, there is enough of newness in this film that arouses curiosity to cine-goers. And rightly so.

Director Bill Condon’s “Beauty and the Beast” is an immaculately constructed live action musical that is almost overwhelmingly lavish, beautifully staged and performed. It is a very impressive production and pays a loving tribute to its classic source material.

In this edition, the film begins with how a proud, handsome Prince (Dan Stevens) is cursed and turned into a beast by a passing enchantress for rejecting her gift of a rose. So, dejected and depressed, with a rose-petalled deadline to become human again, the Prince leads a very lonely life in his castle that is long forgotten by his people.

Meanwhile, Belle (Emma Watson), a genial and independent girl is considered a freakish outsider in her provincial French village because of her interest in books and her indifference to the local hunk, Gaston (Luke Evans) who tries his best to woo her.

It is when Belle’s father Maurice (Kevin Kline), during a business trip stumbles upon the castle and is held captive by the Beast that Belle chances on meeting the Beast. How she falls in love with the Beast forms the crux of the tale.

Though this is an adaptation from the various earlier editions, the script writers Stephen Chbosky and Evan Spiliotopoulos add a few touches of their own. Prominent among the few are the back story for the death of Belle’s mother and revealing the gay traits in LeFou (Josh Gad), Gaston’s buddy.

On the performance front, Emma Watson as Belle is ravishing, but a bit bland. Luke Evans is suitably boisterous as Gaston. Dan Stevens convincingly emotes through his eyes. Kevin Kline with some extremely powerful on screen moments, shines as Belle’s lovable father.

Technically, the film is astutely crafted. The animation of the castle’s enchanted staff which include Lumiere (Ewan McGregor), Cogsworth (Ian Mckellen), Mrs Potts (Emma Thompson) along with the 3D effects is of fine quality.

Production designer Sarah Greenwood along with costume designer Jacqueline Durran display a colourful canvas that is gorgeous and appealing.

There are a few new songs composed for the film, among them are a flashback song “Aria” sung by Audra McDonald and the song having the lyrics, “Days in the Sun” sung by the enchanted objects.

Overall, the film is enchanting but not remarkably memorable.