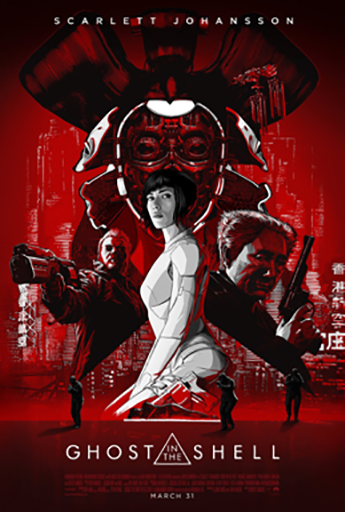 The core premise of “Ghost in the Shell” has been done to death throughout cinema, but the overall presentation of the film is incredible.

It begins on an incredibly stylish note in a far-distant future Japan, where the line between cybernetics and humans is beginning to blur. A human brain is infused into a completely synthetic humanoid body, and what follows is a fast-paced, action-packed drama.

Simply interpreted, it is the story of a woman called Mira Killian (Scarlett Johansson) who nearly perishes in a terrible accident, but she is saved by Dr. Ouelet (Juliette Binoche) who inserts her mind/soul or consciousness into a robotic body and is used as a weapon or a perfect soldier in a government agency, to stop hackers and criminals around the city.

Mira as Major, along with her partner Batou (Pilou Asbaek) report to the mysterious and intimidating Aramaki (Takeshi Kitano). They are on the hunt for a shadowy killer Hideo Kuze (Michael Pitt), who is targeting scientists at Hanka, the organization where the Major was created.

Apart from this routine battle of existence, how Major Mira Killian yearns to learn about her past, forms the crux of this tale.

The visuals are gorgeous and glossy, layered with heavy computer-generated images. Every space in the frame is covered with holographic images which are exciting to look at, but do not add any gravitas to the narrative. The plot and the scenes are too convoluted and complex. The story feels rushed, incoherent and fails to keep you hooked.

The dialogues come off as very clunky, raising big philosophical questions that let slip at best, but reduced to patronizing at worst.

The performance of every character lacks soul. They are purely perfunctory.

The only thing worth a mention in this film is the production design, especially the matrix and the robots.

With a nearly two-hour run time, the film gets tedious to watch.

Overall, “Ghost in the Shell” is a visually arresting film that has it occasional moments of brilliance in the action scenes, but fails to hold your attention for long.