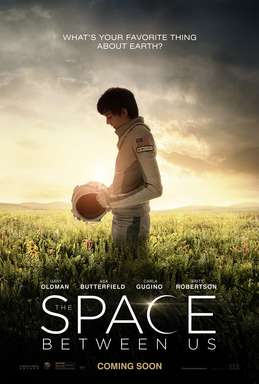 A sci-fic romance, this film is targeted at the Valentine Day’s audience.

While on the face of it, the film is a romantic tale of a boy from Mars and a girl from the Earth, in reality it is a son’s search for his biological father. The premise is promising, but the film fails to deliver, simply because of its cheesy execution.

Director Peter Chelsom tries to evoke the same emotional quotient of Director Josh Boone’s 2014 released film “The Fault in Our Stars” but he fails miserably on several accounts.

Narrated in a linear manner, the film begins with a group of astronauts travelling on a mission to Mars. En route, Sarah Elliot (Janet Montgomery), the team leader, realises that she is pregnant, but by then it is too late for her to return to the Earth. Her pregnancy is kept secret from the media by NASA. She gives birth to a son Gardner, but dies during childbirth.

Sixteen years later, Gardner (Asa Butterfield), who has spent his entire life in isolation on Mars raised by his surrogate mother Kendra (Carla Gugino), is frustrated with the situation he is in. But he has a friend on the Earth, Tulsa (Britt Robertson) a rebellious Colorado high school student with whom he regularly video chats via computer. How he hooks up with her is anyone’s guess.

When Tulsa expresses a desire to meet him, Gardner makes those typical excuses saying that he suffers from a rare disease and is forbidden to socialise. But when he chances upon a few of his mother’s belongings, he finds an old picture of hers with a man, who he assumes to be his father. So he plans an escape to the Earth and succeeds.

Once Gardner reaches the Earth, he connects with Tulsa and tells her of his desire to meet his father. The film shifts gear to a road film with the duo inadvertently running away from the people who can actually help them.

Romance brews along the way, in preposterous situations. Their relationship is cute and some of the things Gardner says are oft-heard yet adorable, making the scenes seem corny, stupid or even cringe-inducingly unfunny. As the mystery unfolds and they edge closer to finding his father, the plot spirals out of control.

Throughout the narrative, you do not connect with the characters. Their chemistry lacks the chutzpah of a romance in this perfunctory tale.

Nevertheless, Asa Butterfield, who had earlier featured as a child actor in Martin Scorsese’s 2010 released “Hugo”, is promising. He offers a fine act. With an awkward gait and a matter-of-fact demeanour he portrays Gardner earnestly. He is aptly supported by Britt Robertson, who is equally brilliant.

Carla Gugino as Kendra and Janet Montgomery as Sarah Elliot get into the skin of their characters but they have nothing much to offer. Gary Oldman as Nathaniel Shepherd at the helm of Mars mission, is loud and over-the-top.

The production values are of expected quality, but overall tread wisely into this space only if you must.