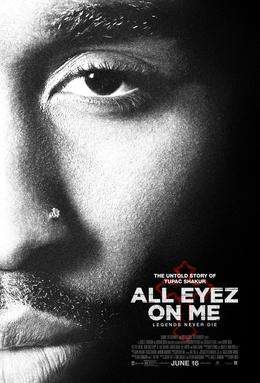 Directed by Benny Boom, “All Eyez on Me,” is a biographical drama about the hip-hop artist Tupac Shakur and is titled after Shakur’s 1996 fourth studio album of the same name.

Narrated in a non-linear manner, the film highlights the important milestones of Shakur’s life, through flashbacks during an interview he undertook in 1996 whilst in prison. The narrative packaged in a haphazard manner, encapsulates the short but highly complexed and contradictory life of the famous rapper, who died in a drive-by shoot-out at the age of 25.

While the first act of the film starts off on an unsteady note with scenes of his childhood abruptly and amateurishly edited, the later section of the film holds your attention with its gritty proceedings that reveal the hardships Tupac faced as a revolutionary artist who was influenced by his mother and comrades of the revolutionary Black Panther Party.

The script written by Jeremy Haft, Steven Bagatourian and Eddie Gonzalez (VIII) is soulless as it selectively highlights the highs and lows of his career and presents him as a naive and vulnerable free-soul in a cage in a rather conniving style. And the fault lies in the screenplay.

His struggles as a forcefully evocative talent who would rap in an aggressively and irresistible manner that made him a prolific hit machine, his movie star and gansta icon avatars, are all presented synthetically. Also, the numbers belted out by him are shown in a routinely rushed mode, only giving you a glimpse of the singer’s popularity, making the entire viewing rather insipid fare.

Demetrius Ship Jr. emulates Tupac to near perfection but he lacks the charisma of the original. And the rushed narrative does not help you invest in him. The highlight of the film is the relationship, Tupac shares with his mother and credit goes to Danai Gurira who portrays her part to perfection. Despite their short on-screen togetherness, the emotional bonding between the mother and son lights up the screen and is the soul of the narrative.

Kat Graham as Tupac’s friend Jada Pinkett and Lauren Cohan as one of his promoters Leila Steinberg have their moments of on-screen glory. The rest of the supporting cast are stereotypical and perfunctory.

With moderate production values, the film is a candy floss laden tribute of the controversial singer.