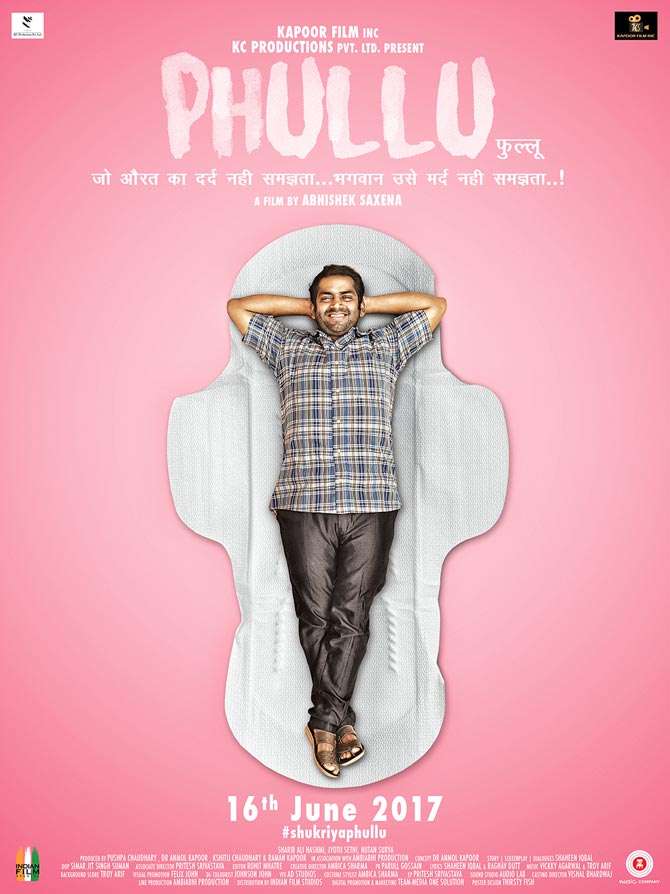 I remember the first time a woman actually mentioned she was having her “chums”. She is a frank-speaking effervescent actress who always spoke her mind. But she still shocked me when she mentioned her time of the month to me.

I pretended not to be shocked.

“Phullu”, played by that underused “Filmistaan” actor Sharib Hashmi, has no such pretensions. Once he gets to know how women smother their painful menstruation days in unhygienic cloth and rags thereby inviting unmentionable infections, he makes it his life’s mission to introduce proper sanitary pads in his backward village.

Fine. We all have a mission in life. Some want to change the world by blowing up buildings and mowing down innocent pedestrians. Some just want to make a difference by easing the pain of human beings. As “Phullu” says at one point, “Any man who doesn’t understand a woman’s pain is unacceptable in the eyes of God”.

“Phullu”, the modern equivalent of a village idiot, will bring the sanitary napkin to the womenfolk of his village even if he is ridiculed, heckled and thrashed. His mother (Nutan Surya) calls her son a ‘mauga’ (sissy) so many times that it could be his nickname.

But no, Phullu is not gay. Every man who is interested in menstruation is not gay. Cleverly, debutant director Abhishek Saxena has portrayed Phullu as a virile heterosexual whose marriage to the comely Bigni (Jyotii) triggers off a libidinous binge in Phullu and an anti-libidinous outrage in his mother.

“She rubs herself with Lux soap twice every day and he keeps smelling her all day long,” the old lady complains to the neighbourhood gossip.

Phullu’s adoration of his wife reminded me of Nawazuddin Siddiqui in “Manjhi: The Mountain Man”, though this is a far more sexed-up adoration. The use of an old Mukesh song “Chand si mehbooba” and a memorable romantic trip on a boat across a silent river, convey the love that this man feels for his significant other.

Sharib Hashmi reminded me of Nawaz before he (Nawaz) grew aware of his acting skills and began to use them consciously.

The dialogues are voluptuous and swarmy the way the rural people speak when they talk about bodily functions, specially sex. But some of the actors are clearly amateurs facing the camera for the first time wearing newly-purchased, loud, unsophisticated saris to look their cheesy parts.

Whatever reservations one may have about the film’s crude exterior and cruder contact points in the plot where Phullu addresses the menstrual issue (“Why do you use cloth under your petticoat?” he asks a scandalized woman), all our misgivings are blown away by Sharib Hashmi’s plot-defining performance.

He breathes an unvarnished earnestness into Phullu’s part making us believe that a man can actually be so committed to accessing sanitary pads to women who can’t afford them.

Many sections of the film, like the episode with the well-meaning press reporter (played by Namya Saxena) convey a coarseness of conception and an inelegance of execution that make us cringe. But there is so much heart to Sharib Hashmi’s part and such a genuineness about his character’s mission to make every woman’s time of the month, comfortable.

“Phullu” gets you not for any discernible cinematic qualities, but for just being what it is.

A film about a simple innocent rustic man who wants to make women comfortable. Period.