The latest offering from the multi-award winning Drishyam Films is their first short film Paroksh. The movie has been released under the banner of ‘Drishyam Shorts’, highlighting the interest and intention of the production house to dabble more with this genre in future….writes Suditi Jindal 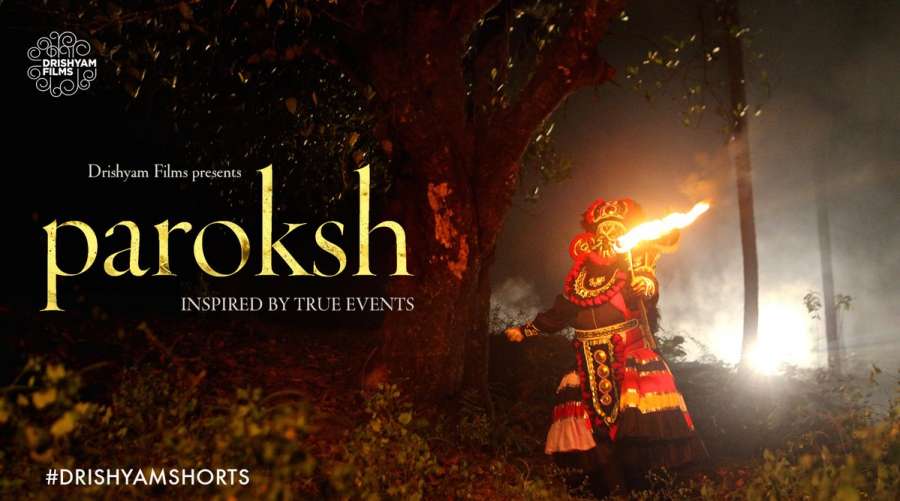 The movie, written and directed by Ganesh Shetty, is introduced with the tagline, ‘we fear what we cannot see’ and is cited as being based on true events. Yateen Karyekar (of the tele-serial Shanti fame), Amit Sial and Pooja Upasana feature in this 12 minutes and 20 seconds long film, where the actual feature winds up within ten and a half minutes.

The film has all the right ingredients to invoke intrigue and drama. The quotient of spookiness is accentuated by the absence of inane horrible figures of bloody carcasses and grotesque human forms. The reticence of the characters adds to the element of mystery of the narrative.

Ganesh Shetty has succeeded in conveying the sense of horror through masterful positioning of everyday elements of a semi-urban setting with the pivotal junctures of the story. The clincher for me of the film is its background music. Especially, when the intensifying build-up of eerie is conveyed through the sound of the water pitcher and rope falling into the well. The sounds are all natural – the birds chirping in the thicket of trees, the grumbling of cattle, and burning and crackling twine- add to the drama of the piece. Even the scene of the nightmare, the turning point of the story, is devoid of unnecessary images and sounds.

The story of the movie is the winner in all aspects. It is an apt comment on human psyche and the tendency to fear what the eyes cannot see, very much in accordance with the title which means ‘invisible’. The reverberating thought about the disposition of the human race to find complexity, superstition and dogma in place of simple reasoning, resonates in the echo that pervades the narrative. All the symbols like the mature adults and the wise godman are depicted succumbing to the fear of the unknown. Their own beliefs fester delusion in other characters and symbols in the movie.

The ironical ending of the movie is a profound observation about human mentality. We are really hell-bent (pun intended) on making our life horrible and complicated, when in reality it is simple.