As distinctive as their full-throated voices, the Langhas, a Muslim community of folk musicians from Rajasthan, have evolved a rather unique way to preserve their identity for centuries. It’s a strict no-no for them to marry into other communities….writes Sahana Ghosh 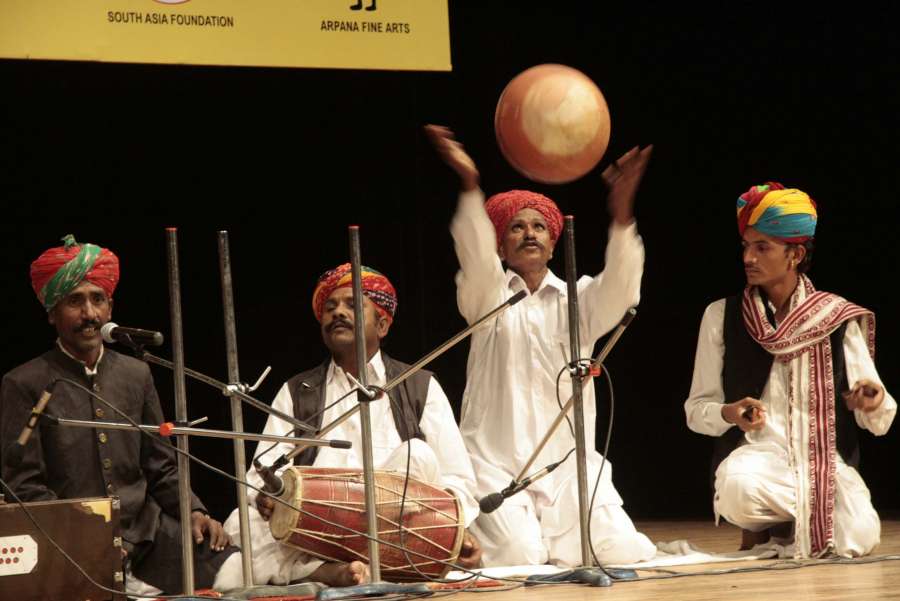 Langhas (different from the Manganiyar musicians), with the gentle twang of the four-stringed Sindhi sarangi and the rattling tones of the khartal, four pieces of wood clapped together to set pace, are synonymous with the popular folk song “Kesariya Bala” in “Zubeida” and several other hit Bollywood tracks.

In an exclusive tete-a-tete on the sidelines of the Amaravati Global Music and Dance Festival, a trio of Langhas — Sikandar Langha, Asin Khan and Atta Mohammed — offered a peek into their lifestyle and their music, and in the process debunked myths regarding their “set ways”.

“Sindhi-Sipahis are our patrons and we traditionally perform music services for them. Our instrument is called Sindhi Sarangi. Our legacy has survived for generations, over seven or eight generations, at least. We learn the folk songs from our older generations and we pass it on to our next. It is an in-house ‘parampara’ (tradition). We also marry only within the community so that our music thrives in our bloodline and genes,” Sikandar Langha explained.

“When a child is born, he is already in tune by birth. It is the ‘blood’ singing,” he asserted proudly.

One is strongly reminded of the use of Italian phrase “La tua cantante” (“Your blood sings for me”) in Stephanie’Meyer’s bestselling vampire saga “The Twilight” series.

Dissecting fact from fiction about their culture, Khan and his companions, attired in multi-hued pagdis (turbans), jackets and contrasting white kurtas, elapsed into an impromptu demonstration of their prowess over timbre: some melancholy notes, some a bit mirthful and others a mix of the two, seeming to reflect the vastness and desolation of the mighty Thar desert, their home.

“We don’t know how many Langhas are there in Rajasthan today. They are spread over 12 villages. The population is mushrooming,” he said merrily, clapping and rattling his khartals.

Apart from the marriage code, another stricture is that women don’t sing professionally, they only croon during family functions, Sikandar said.

However, there are notable departures from some beliefs.

“People think we are very conservative. We do have a strong feeling of music being in the blood but that doesn’t mean we do not let others learn our songs. We teach anyone who is interested,” Atta Mohammed, Sikandar’s colleague, pointed out.

They have no qualms about showcasing their heritage to the world either, Bollywood included. They regularly collaborate with singer Kavitha Krishnamurthy and others.

“The song ‘Nimbuda’ sung by Kavitha didi in the film ‘Hum Dil D’ Chuke Sanam’, is actually from our community. Earlier, we only performed for our patrons (yajman), but now we perform across the world, irrespective of religious divides and beliefs. Most don’t understand the Rajasthani language but when they hear our renditions, they get the music,” Mohammed said.

Are they insecure about the younger generation’s keenness to carry on singing?

“Not at all. Our children are free to do what they want. We have a thriving population and so if anyone deviates, it’s not a worry to us. And since the music is in the blood, they usually follow the path,” Mohammed signed off, requesting listeners to connect to them via Facebook.