A rebellion began Indian-American teen Indrani Das on her way to the brain research that got her the quarter-million-dollar Regeneron Science Talent Search award for high school students….reports Asian Lite News 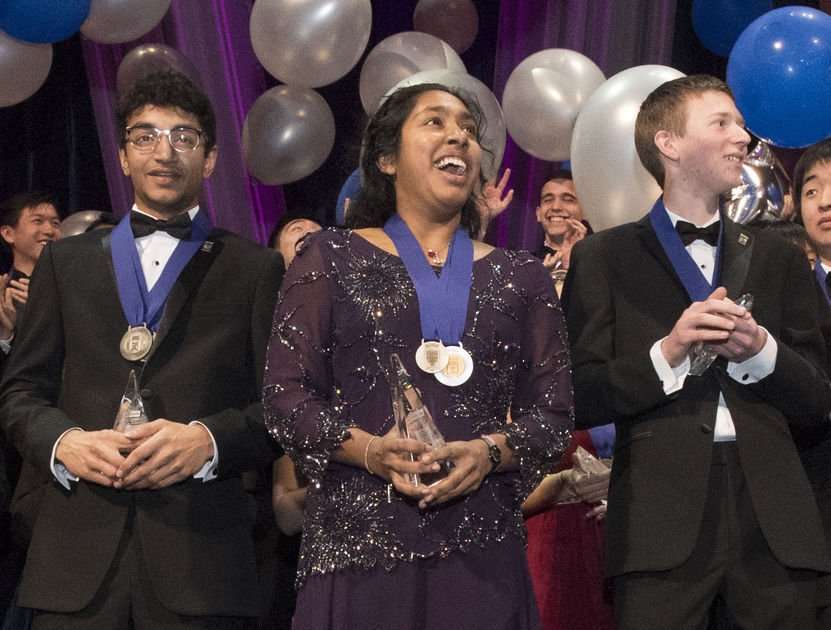 Most Indian parents want their children to become doctors, but not her parents.

Das, who calls herself a “rebel”, recalled that her parents had told her: “Whatever you do, don’t be a doctor. Don’t become a doctor, it’s long and expensive.”

“So I decided I wanted to be a doctor,” she said.

And that rebellious ambition led her to her medical-oriented science project.

Her parents Bidyut and Tanima Das, who are from Kolkata and now live in Oradell, New Jersey, are bankers by profession.

The 17-year-old, who is in the final year of high school at the Academy for Medical Science Technology in Hackensack, said she wants to become a doctor who simultaneously does scientific research.

“I want to be physician-scientist,” she said. “I would like to see patients, but I would also like to do research.”

Her project on finding ways to treat damage to the brain from injuries or disease won her the top prize earlier this month in the nation’s foremost science contest sponsored by Regeneron and conducted by Society for Science and the Public (SSP).

Nicknamed the “Junior Nobel Prize”, the Science Talent Search competition was originally sponsored by Westinghouse in 1942 and Intel took it up from 1998 till last year.

Twelve of the contest alumni have won Nobel Prizes.

Indian American teens took five of the top ten awards in this year’s competition in which 1,700 high school students participated.

SSP President Maya Ajmera said Das’s “dedication to making the world a better place through science — whether through her research on treating brain damage or volunteer work in her community — is truly inspiring”.

Explaining her research, Das said that when Alzheimer, Parkinson’s, stroke or a traumatic injury affects the brain, the neurons, which are the main signal cells of the brain, are killed.

Next the supporting cells — astrocytes — that are supposed to nurture and protect the neurons, go awry and create a toxic chemical environment, poisoning the neurons.

“It pushes these supporting cells with treatment to create a chemical environment that is safer and cleaner for neurons to grow in” after a damage to the brain, she said.

There are several steps before a medical treatment based on her research can become available to patients.

“First thing I will need to do is use my treatment in animal models,” Das said. “So I will have to work on increasing the complexity of my models.”

She said that she wants to find out where and how exactly the treatment is effective.

“Finding how it works will will help me back-track and understand this whole injury condition better, which is something nobody really understands,” she said.

Her school is equipped with a cell culture facility for her research.

Her mentor, Donna Leonardi, was her biology teacher. She is a former lab director at New York Presbyterian, a major medical facility affiliated with Columbia and Cornell universities.

In preparation for a medical career, Das got certified as an emergency medical technician (EMT) last year. As a volunteer EMT she goes out on ambulances to attend to emergencies as a first responder.

Besides her studies and research, she manages to find time for non-medical activities too. “I play the trumpet,” she said. “I enjoy skeet-shooting, weightlifting.”

And one of her ambitions for college? ” I hope to play rugby in college,” she said. “I told you I was a rebel.”