Getting a tattoo is painful, and so could be creating one. While perching on low stools, leaning forward, and craning their neck to keep their eyes close to the tattoo they are creating — sometimes for hours at a stretch — the artists stress their upper back and neck muscles much more than they should, according to a study….reports Asian Lite News 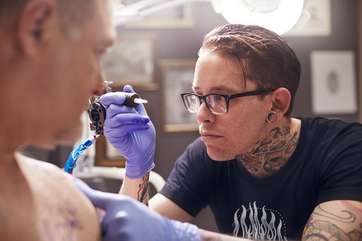 Researchers at the Ohio State University in the US measured the muscle exertions of 10 central Ohio tattoo artists while they were working, and found that all of them exceeded maximums recommended to avoid injury.

One of the main problems is that the industry does not have specialised seating to support both the artist and the client, said one of the researchers Carolyn Sommerich.

“There’s no such thing as an official ‘tattoo chair’, so artists adapt dental chairs or massage tables to make a client comfortable, and then they hunch over the client to create the tattoo,” Sommerich noted.

Adding to the problem is the fact that many tattoo artists are independent contractors who rent studio space from shop owners, so they’re not covered by workers’ compensation if they get hurt on the job, study co-author Dana Keester said.

The researchers observed the artists who agreed to work while wearing electrodes that precisely measured their muscle activity.

Though a single tattoo session can last as long as eight hours depending on the size and complexity of the tattoo, the sessions used in the study lasted anywhere from one to three hours.

In addition, the researchers used a standardised observational assessment tool to assess each artist’s posture every five minutes and took a picture to document each observation.

All 10 tattoo artists exceeded recommended exertion limits in at least one muscle group.

Most notable was the strain on their upper back muscles that connect the shoulder blades to either side of the neck, a common site for neck/shoulder pain.

Some exceeded limits by as much as 25 per cent, putting them at high risk for injury.

Publishing their findings in the journal Applied Ergonomics, the researchers also offered some suggestions on how tattoo artists can avoid injury.

Artists could experiment with different kinds of chairs for themselves, and try to support their back and arms.

They could change positions while they work, take more frequent breaks and use a mounted magnifying glass to see their work instead of leaning in, the researchers said.

They can also consider asking the client to move into a position that is comfortable for both the client and the tattoo artist, Sommerich added.