US President Donald Trump slammed the country’s five major media organisations by calling it “the enemy of the American people”….reports Asian Lite News 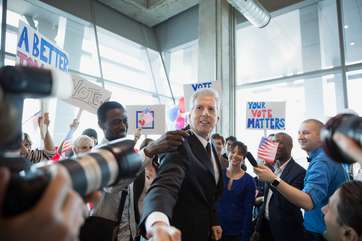 “The FAKE NEWS media (failing @nytimes, @NBCNews, @ABC, @CBS, @CNN) is not my enemy, it is the enemy of the American people!” he tweeted after arriving at his Mar-a-Lago home in Palm Beach, Florida, on Friday.

However, he quickly deleted the tweet and posted a slightly different version which omitted ABC and CBS. He also included the word “SICK!” at the end of the original post, Xinhua news agency reported.

“Trump’s tweet was a striking escalation in his attacks on the news media,” a New York Times report commented.

Earlier on Friday, US Senate Majority Leader Mitch McConnell said at a press conference: “I’ve been pretty candid with him and all of you that I’m not a fan of the daily tweets.”

The President’s latest tweet came a day after his first solo news conference in the White House, where he criticised the US media as “very fake” and “out of control”, while denying news reports over alleged possible contacts of his administration with Russia.

After the lengthy press conference, Trump’s team sent out an email survey asking people to respond with how they feel about the media.

“Instead, you — the American people — are our last line of defence against the media’s hit jobs,” one line in the email read.

Steve Bannon, Chief White House Strategist, called media people the “opposition party” in an interview with the New York Times last month, asserting that “the media should be embarrassed and humiliated and keep its mouth shut and just listen for a while”.

“They don’t understand this country,” Bannon said in the interview, “They still do not understand why Donald Trump is the President of the United States.”

Echoing Bannon’s remarks at the time, Trump said in a TV interview that “the media is the opposition party in many ways”.

Since the November 8 presidential election, Trump has frequently exchanged fires with many US mainstream media groups especially the New York Times and CNN.

Many local analysts regards the anti-media rhetoric as a key part of his anti-elite and anti establishment strategy.

A Rasmussen Reports national telephone and online survey finds earlier last month that 48 per cent of all Likely US voters believe that most reporters are biased against Trump.

Only 12 per cent thought they were biased for Trump, while 31 per cent feel most reporters try to be fair and balanced.